Transgender people face pervasive discrimination, harassment and violence. Leslie Mora and Carmella Etienne—victims of hate crimes in two separate incidents in Queens—are witnesses to the violence that is perpetrated against people because of their gender identity or expression. In its most extreme form, such violence can turn deadly, as it did in the case of Lateisha Green, 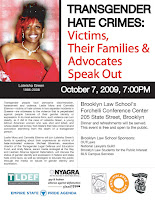 a young African American woman who was shot and killed, and whose death lead to New York State’s first hate crime trial and conviction stemming from the death of a transgender person.

On Wednesday, October 7th, at 7pm, TLDEF clients Leslie Mora and Carmella Etienne will join Lateisha Green’s family in speaking about their experiences as victims of hate-motivated violence. Michael Silverman, executive director of the Transgender Legal Defense and Education Fund, and Andy Marra, senior media strategist at the Gay and Lesbian Alliance Against Defamation, will discuss the status of gender identity and expression in federal and state hate crime laws, as well as strategies to educate the public through the media on issues of gender identity and expression.
WhatTransgender Hate Crimes: Victims, Their Families & Advocates Speak Out