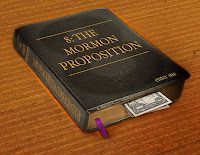 Reed Cowan, producer of the critically acclaimed Sundance entrant film "8: THE MORMON PROPOSITION" which exposes the Church of the Latter Day Saints (LDS) participation in the passage of Prop 8 in California and anti marriage equality elsewhere is entered in a poll in the paper Times and Seasons, to determine which people had the most impact on Mormons and Mormonism in 2008. It only takes a second and your participation will have far reaching effects in educating innocent LDS members and others. Please vote for Reed Cowan at times and seasons.org

It only takes a second and voting ends on January 7 at midnight ET. Please do this and pass it on to others: YOU ONLY HAVE A FEW MORE DAYS TO DO THIS. VOTE, THEN POST TO YOUR FACEBOOK, BLOGS, E MAIL LISTS, ETC. please.

Posted by planetransgender at 12:35 AM