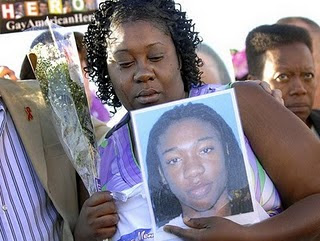 "Since her son's death, Mrs. King "brought the conversation of love, acceptance and compassion into a community where black [gays and lesbians] are invisible," said Michael Emanuel Rajner, a co-founder of Transgender Equality Rights Initiatives, who became a family friend after the murder."

"The night of her son's viewing, she left early because she had gotten a call from someone that evening that there was a youth, about 16, thrown out of his home because he was openly gay," Rajner said.

"Denise, not even knowing the child's name, hit the streets with her car up and down Sistrunk looking for this child. She would take them in. Her home became this safe haven for people to run. In her pain she was moved to make certain no child was turned away."