Truth and TO$WK Scorching Sunday Edition: No place to Hide. 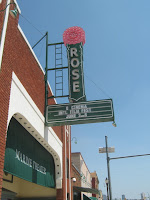 Our intense methods employed to protest of TO$WK demanded the full attention of the morally responsible theater goers, made others angry and sent a few scurrying away in fear like mice from a feline telling of truth and humanity. 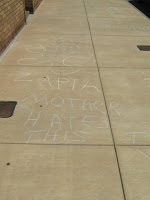 The ghosts of the sidewalk, now impressed permanently into the souls of Q Cinema patrons held memorized in the blistering sun, unmoving, while learning of the horrors of their demise. "They are OUR sisters" I heard myself and others repeating "who were used by Luna as a cheap advertising ploy to promote his unrepentant reprehensible grab for cash."

We drew the outlines of our murdered sisters there to instill a sense of reverence and reality to those patrons who questioned us about them....

It was extremly effective as most all of the patrons had no idea we are getting murdered at a rate of over two per week and the way to$wk's violent images further endangers us by empowering those who may have otherwise not acted on impulses to harm us. It was extremly effective in opening a direct pathway to peoples hearts as we explained why we objected to this movie.

I am fully aware that we will never advance in equality without our LGB community, I love them and value them. I pray with our community weekly and they supported us in this protest because we are there sisters and brothers. This was not a attack on the gay and lesbian people, but a statement protesting Israel Luna's movie.

We will not be silent in the face of tyranny. There are people all across our county who see this as a campaign for human dignity and women's well being.

TO$WK will be protested and educated about where ever it goes by a ever widening swath of society led and inspired by some of the most passionate human rights campaigners, transpeeps! 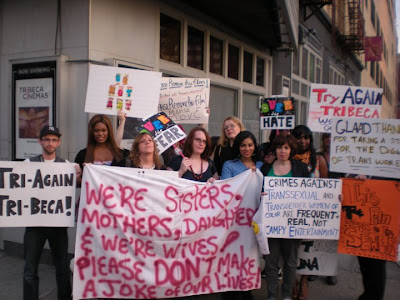 In some ways Ashley's was better, but together with our integration of the largest LGBT church's support we have generated a dynamic that has ignited transgender people nationwide to join in protest whether its the worldly Tribeca or a small cowtown venue like he Rose Marine theater.

William, we are putting together a discussion about this movie and would like to hold it in a neutral venue.

It wouldn't hardly be fair or even a discussion if we didn't have you involved lol.

Would you like to be the "other" sides representative in establishing a location, time and agenda?