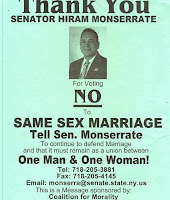 The poster to the right thanking Monserrate is from a previously unknown group "coalition for morality" has no known website and produces no google returns. It is speculated that Monserrate himself produced these posters.

Posted by planetransgender at 5:33 PM No comments: Links to this post