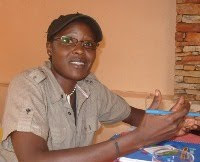 Imagine being a law abiding citizen yet living in fear for your life, having been stoned by neighbors and falsely imprisoned by your government, and your only crime?

KAMPALA, Jan 29, 2010 (IPS) - Every morning Pepe Julian Onziema wakes up not knowing if she will live to see another rising sun. Onziema is transgender and she lives in fear for her life because of a national campaign against gay people.

Although she has done nothing wrong, Onziema lives like a fugitive - always on the lookout to avoid trouble.

Her days are spent in fear and as darkness descends she securely locks the doors to her flat in Ntinda, a Kampala suburb where she lives with her partner.

Onziema is a well-known activist and the national programmes coordinator of Sexual Minorities Uganda, an advocacy network of lesbian, gay, bisexual and transgender (LGBT) organisations. She has appeared on television several times defending the rights of LGBTs. But it has not made her life any easier.

Just like other LGBTs in her country Onziema has been arrested; spat on; attacked; insulted and even stoned by neighbours.Read the rest at IPS RIGHTS-UGANDA: Fugitives in Their Own Country

Posted by planetransgender at 9:20 AM No comments:

I was along with many others, so profoundly effected by the Mormons contribution to the passage of prop 8 became intensely interested in Saltlake cities newly formed GLBT groups.

Like a flickering candle of hope in the mountains, Utah's equality birthright was a battlefield where every attempt to find common ground was met by the goverment and the LDS with stifling overpowering opposition, threatening to extinguish the very human spirit of those courageous early campaigners for equality.

Astonishingly, Utah may emerge as a bright star of fairness if progress is maintained. Many of us are now hopefull.

Equality Utah has been working with Representative Christine Johnson and Senator Howard Stephenson on a Fair Workplace and Housing Bill.

Today at a press conference, Leadership of both the House and Senate along with Representative Johnson and Senator Stephenson agreed to engage in an anti-discrimination study related to Housing and Employment during the Interim Session.

It was also announced that there will be NO PREEMPTIVE BILLS.

Both of these announcements represent incredibly positive developments, especially in light of what was potentially underway during this Legislative Session.

This means that we truly have the opportunity to find Common Ground in the state of Utah. Stakeholders and interested parties have agreed to continue the dialogue to gather pertinent information through the study sponsored by Rep. Johnson and Sen. Stephenson.

Most importantly, just 5 days in to the 2010 Session, we managed to defeat 5 negative bills.

• Two were outright preemptions that would have stopped ANY non-discrimination Ordinances from being enacted, including those that were already passed.

• Two were focused on stripping housing protections from the Housing and Workplace bill.

• One would have gutted the Human Rights Ordinances by allowing religious "Adherents" to discriminate.

Equality Utah is committed to providing these critical protections in Housing and Employment, and will continue to work with all stakeholders until full equality is achieved.

Working for a fair and just Utah,