Pelosi's office says despite the civil disobedience in which four members of a newly formed group 'GetEqual' were arrested at her office she will not move ENDA untill she is sure the bill has all the votes needed to pass. Education and Labor chairman Miller more optimistically stated Thursday that "ENDA HR3015 will be marked up and moved [out of his committee] after heath care reform", but protocol dictates he cannot actually do so untill Pelosi gives him the go ahead. 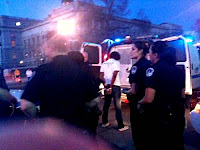 Inclusive ENDA leader Dr. Julian Weiss has compiled a exhaustive straw poll survey which indicates that there are the votes needed to pass ENDA in the House. However Pelosi's office contests this unique citizen poll maintaining that straw polls are conducted only after a bill is moved out of committee and onto the house for a vote. Pelosi says untill then there is no way to know how each individual representative will vote.

In the ENDA Dog raises it's tail to avoid the...

Pelosi's feet dragging enrages LGBT community who resort to committing a act of civil disobedience. The group GetEqual entered the House of Representatives speakers offices on both coasts spontaneously. Their stated goal was to remain in Pelosi's office untill she agreed to move ENDA HR3015 for a vote by the months end if she denied that request, to refuse to leave. The GetEqual members were arrested and release.

US Reps ENDA Spreadsheet: http://bit.ly/Q5YMJ
Posted by planetransgender at 8:47 AM No comments: Links to this post