Tuesday Committee meeting will decide whether a proposal will be forwarded to the Board for a vote on amending its nondiscrimination policy to include gender identity.

Transgender people are well aware that being denied transition can be a life destroying event, so please help Ms.T DART!

The proposal was not passed to the Board during the last committee meeting because of one vote. Committee member Ms. Dunlop Gates changed her vote from a yes to a no, thereby stopping the committee from passing the amendment to the Board.

Please contact the following Dallas city council members and ask them to pass on to the above listed Dart council members your wish that the DART nondiscrimination policy be amended to include gender identity.

Email ThisBlogThis!Share to TwitterShare to FacebookShare to Pinterest
Labels: Call to Action DART

Recently there has been a misconception circulating that transgender people consider drag queens and female impersonators of less value because we are protesting TO#WK.

Not on this blog we don't and certainly we do not hold that belief at the Dallas Transgender Advocates and Allies.

'Traditionally' the reality is, transgender woman who enjoy performing drag, cisgender men and drag kings have always been murdered for the same reason, their gender expression.

Ours is a beautiful rainbow precious in its diversity.

I can tell you this. They were some of the most awesome, courageous woman I have 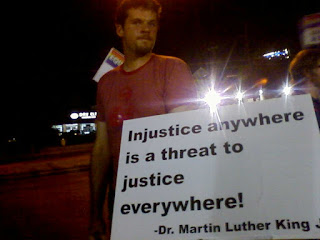 ever met. That protest was the place I had the good fortune of meeting Daniel Williams, pictured right, the first advocate without boundries I ever came in personal contact with. We protested with the entire GLBT community every "trashy Tuesday" untill we successfully forced the owner to accept a agreement mediated by the Dallas fair housing's nondiscrimination 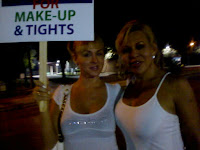 These woman pictured left Sierra Andrews(L)Ceeste Nunez(R), actually had conceived of the Dallas Transgender Advocates long ago but declined my suggestion they take it on line, which I did.

So, it's a cornerstone of the Dallas Transgender Advocates and Allies that we advocate for equality and social justice, focusing on not one part of our beautiful gender or sexual orientation spectrum but every part with equal enthusiasm and commitment.

Absolutely critical for our survival that we love each other, respect each other and go to bat if necessary for each other.

That is why we are protesting TO#WK. It's not the actresses and actors. I actually enjoyed the passion of there performance, admired there facebook profiles, but tragically I abhorred the overall message of TO#WK.

TO#WK makes one dimensional the transgender experience and injects a unreal and potentially disastrous proposition that violence committed against transgender woman can be righted with violence.

TO#WK suggests that "real Woman" do not have penis's and those that do and who "fool" men into sex have committed a crime so horrendous that they may expect and indeed accept any violence that the 'victimized' man deems necessary to right this wrong.

TO#WK must be stopped not just for people who's gender gift blessing is manifested every moment, visually and physically (transgender people), but drag queens (2009 Jimmy McCullough was murdered after a performance) and female illusionists because they are as much at risk from the misconceptions of TO#WK as transgender people.

Most importantly we must protest TO#WK for the LGBT children to come that they may have lives free from this senseless divisiveness and violence.