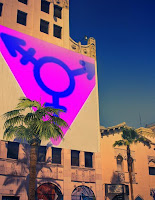 Dallas Transgender Advocates and Allies(DTAA) Calls on DART to be faithful to resolution 950155 passed on June 22, 2010.
The DTAA calls on DART to craft it's nondiscrimination policy so that DART protects it's transgender, Gay, Lesbian and heterosexual employees "unequivocally" as promised.

Transgender advocates and allies attending the June 22, 2010 Board meeting applauded the unanimous passage of resolution 950155 which states;

"It is the intention of the DART board to adopt language at DART that unequivocally prohibits discrimination against persons based upon their gender identity and gender expression.

"Transgender shall mean a person who experiences and/or expresses their gender differently form conventional or cultural expectations including, but not limited to those who express a gender that does not match the sex listed on their original birth certificate or who physically alter their sex."

"It shall be unlawful for any covered entity to discriminate against any individual because of age, race, color, religion, sex, disability, national origin, sexual orientation, transgender, gender identity or gender expression in any manner involving employment, including the recruitment of applicants for employment, advertising, hiring, layoff, recall, termination of employment, promotion, demotion, transfer, compensation, employment classification, training and selection for training or any other terms, conditions or privileges of employment."