I received this from the NAACP. It's about racisim but the bigotry that is behind this hatred is universal. Transgender people must stand with all people in a united strugle against injustice no matter who or where it is found. 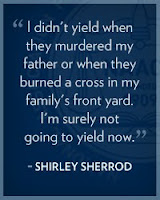 from Shirley Sherrod Back in March, I delivered a speech to an NAACP Freedom Fund banquet in my home state of Georgia. I drew on my personal life story to urge poor people, white and black, to pull together and overcome racial divisions. We have to understand that our struggle is against poverty and against those who are blocking our path out of poverty.

Unless we figure this out, I warned, our communities won't thrive and our children won't prosper.

As you know, a Tea Party blogger named Andrew Breitbart released an intentionally deceptive, heavily edited clip from that speech to make it look as if I was delivering exactly the opposite message. Then Fox News blasted that false message across America's airwaves, creating a firestorm that led to my ouster as the USDA State Director here in Georgia.

Not long ago, I sat here in my living room in Albany, Georgia for an afternoon of deep conversation with NAACP President Benjamin Jealous. As he has done in public, Ben movingly apologized for the fact that the NAACP was initially hoodwinked by Breitbart and Fox into supporting my removal. I told him what I want to tell you.

That's behind us, and the last thing I want to see happen is for my situation to weaken support for the NAACP. Too many people confronted by racism and poverty count on the NAACP to be there for them, especially those in rural areas who often have nowhere else to turn.

People ask me, "Shirley, how are you getting through all of this?" I tell them that, if they knew what I have lived through, they'd understand that these current challenges aren't about to throw me off course.

When I was 17 years old, my father was murdered by a white man in Baker County, Georgia. There were three witnesses, but the grand jury refused to indict the person responsible. I knew I had to do something in answer to my father's death.

That very night, I made a commitment that I would stay in the South and fight for change.

I have lived true to that commitment for 45 years. I didn't yield when, just months after my father was killed, they came in the middle of the night to burn a cross in front of our house with my mother, four sisters, and the baby brother my father never got to see still inside.

And I'm surely not going to yield because some Tea Party agitator sat at his computer and turned everything I said upside down and inside out.

I learned a lot of lessons from my parents growing up, but one of the most important ones is what my mother taught her children after our father was killed. She told us we mustn't try to live with hate in our hearts.

My mother led by example. Just 11 years after that cross-burning incident, she became the first black elected official in Baker County, and she's still serving, still working to bring people together.

You and I have to keep working as well. Change has to start with us. I have been overwhelmed by the outpouring of support I have received over these last few weeks. It means so much to me and my family.

But you and I have to make sure that people all across the country who wage a daily struggle against poverty and racism have support networks as well. And that's why your personal involvement in sustaining the NAACP is so critical.

The NAACP confronts the virulent racism that my family and so many other families have had to endure. But it is also leading the way in breaking down the structural barriers that block so many people's paths out of poverty.

In our struggle between the "haves" and the "have-nots," they want to keep the poor divided - and we have to insist, by our words and our actions, that there is no difference between us.

As we move forward together, I urge you to remember this: Life is a grindstone. But whether it grinds us down or polishes us up depends on us.

Thank you for all you are doing to challenge poverty and racism. I look forward to working and struggling right by your side.