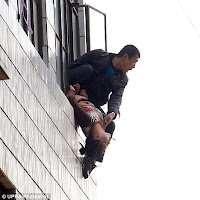 Think your transgender day in the grand republic of Texas is bad now?

Should our worst fears be realized, you may very well have to revert to your gender identity the doctor assigned you at birth, and up to this point the national gay and lesbian organizations may as well be helping to hang us out, upside down.

Maybe they feel it's a no win battle her or perhaps as the ENDA Blog suggests or perhaps they just don't give a damn.

Money talks and according to attorney Phyllis Frye gay.com hasn't antied up.

In a email Phyllis asks:

Where is the same national support given for the L and G same-sex marriage struggles? Has it remained nonexistent for over six weeks now because this Texas fight is insignificantly and merely a “tra##y” same-sex marriage fight, so who nationally gives a shit? Then are we a National LGBT-inclusive community, but NOT when it comes to financing the “tra##y” same-sex marriage fights? From here, it seems to me — still — that the national L and G groups and the big bucks L and G attitudes haven’t really changed very much. FOLKS, IT IS TIME YOU FIGURED IT OUT THAT THE SAME-SEX MARRIAGE FIGHT IS JUST AS MUCH A TRANSGENDER FIGHT AS IT IS A LESBIAN, GAY AND BISEXUAL FIGHT.

Posted by planetransgender at 9:06 AM No comments: