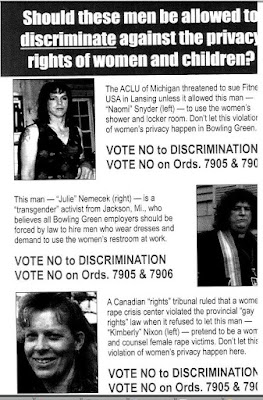 The mailer's intentional misgendering and slandering of non resident transgender people is crafted to instill fear, distrust and transphobia in hearts of local Bowling Green voters.

But there's a even more insidious malevolent intent.

This campaign is meant to cow transgender people nationwide. Its purpose is to isolate us individually making us hope for safety in obscure anonymity. They wish to make us subservient to there extremist right wing agenda, fearful of intimidation.

The BG hate group methods mirrors in many ways mirror the failed recall campaigns waged by local hate groups and defeated by popular vote spearheaded by Michigan's One Kalamazoo and Florida's Equality Gainesville and Equality is Gainesville's Business.

One Bowling Green responds and is validated as the hateful lies disappear in the presence of truth! There have been no discrimination complaints filed since Kalamazoo ordinance vote or instances of anyone's privacy or safety being compromised by equality in Gainesville.
Posted by planetransgender at 8:43 PM 2 comments: 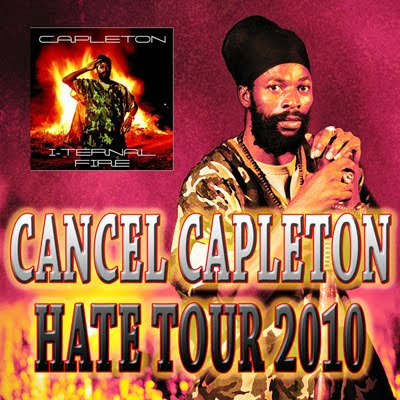 "The Capleton show has been canceled at The Kinetic Playground. I have spoke with Andy Thayer and Roger Fraser to inform them of such. This show many still happen somewere else but as far as The Kinetic Playground is concerned this show will never happen at our venue. We supported your organization, now we would hope that the LGBT community would come support ours. Come out and have a drink the Oct 9th at theKinetic Playground!"

Andy Thayer organizer for the GLN has confirmed that this Chicago venue which was persisting on hosting this vehemently anti LGBT Jamaican performer has canceled the Capleton show.

"Through a series of negotiations this week and last and with the threat of a demonstration, Gay Liberation Network (GLN) and other community activists were successful in persuading management at Kinetic Playground nightclub, 1113 W. Lawrence Avenue, to cancel "Kill Gays" dancehall performer Capleton for a show originally scheduled for late this Saturday night, October 9th."

"In human rights circles, Capleton's Jamaica has one of the worst reputations for anti-LGBT mob violence in the hemisphere, with Jamaican police openly tolerating it. In 2004 the country's leading gay rights campaigner, Brian Williamson, was stabbed multiple times in an apparent anti-gay hate murder. The constant threat of violence has forced other gay rights campaigners to flee the country."

"Capleton is one of a small group of Jamaican performers who have gained international notoriety for openly calling for the murder of lesbians and gays in the lyrics of their songs. As recently as last December at a concert in Jamaica, Capleton called out congratulations from the stage to those who commit violence -- "All who a bun battyman and sodomite, hand up!" ("All who have burned queers and sodomites, put your hands up!")."

"We are big supporters of free speech, having had our own threatened on numerous occasions. But only a fool would say that calls to lynch people – whoever the targets – is "free speech," any more than is yelling "fire" in a crowded theater. Nor is Capleton's right to spew hate from the stage compromised by GLN's right to protest his presence on that stage. He has a right, within limits, to say what he pleases; he has no right to the stage he wants to say it from, it doesn't belong to him."

"The cancellation of Capleton is a victory that all human rights supporters should savor. The Gay Liberation Network, which initiated the campaign against Capleton in Chicago, commends Kinetic Playground management for putting human rights principles above dollars by canceling the show."

"Please put an exclamation point on this victory by buying a drink or two this Saturday night at Kinetic Playground, 1113 W. Lawrence Avenue, so that the management and staff there know that Chicago is willing to stand behind those who follow their conscience."

Outside the Windy? Please Email The Kinetic Playground and thank them!
Posted by planetransgender at 9:51 AM No comments: