Mum wishes I wasn't a faggot but transgender, so we'd be girlfriends

Title adapted from UK S*onewall youth PSA: "Maybe my mum wishes I was a tranny then we'd be girlfriends."

You bet your ass it is. So is your video offensive WORLDWIDE to transgender people in the same way.

Pink News reports "yet another bone of contention between Stonewall and the trans community – the FIT DVD, produced by Stonewall for distribution to schools, which talks about “trannies” in a manner that Trans Media Watch believes serves to normalise what is generally considered a term of abuse." Stonewall tries to rationalize "This is rejected by a spokesman for Stonewall, who claims that the DVD is meant to be illustrative of everyday language, without endorsing it in any way."

NO tranny in this context is NOT everyday language.

S*ONEWALL is attempting to socially normalize a former term of endearment by adding negative connotations to 'tranny' thereby transforming 'tranny' into a pejorative. 'Tranny' could then be used then by S*onewall to defame trans people while S*onewall continues claiming innocence. Eventually they even may begin demanding transgender people 'reclaim tranny' as gay men in America have been attempting to do.

I used to be a adult volunteer with a youth group that held weekly talk sessions much like your the one shown in this PSA. Whenever one of the male identifying youth gathered enough courage to admit to the group he liked or felt best when wearing female clothing the group leader a gay man, would look at him with a smirking incredulous look, and shout "NO WAY". A response undoubtedly moderated because I was in the room.

This would always lead to a pillows being thrown at the youth with shouts of negativity. Undoubtedly shamed, the gender questioning youth would become silent and remorse forced further back into hiding, perhaps for the rest of his life. BY GAY PEOPLE.

Like this video, at this group if a female indicated she felt more comfortable identifying as a male she was readily accepted because that's sexy and she was after all, just a confused lesbian. A precept encouraged by misogynistic men gay and straight. Because two lesbians having sex is hot and not a threat to their masculinity. They could after all be 'cured' at leisure by any man with a dick and a good fucking.

?Just like gay men could be UN homo-ed by a fixer, or a woman?

Now that IS threatening to gay men and not sexy. You will NEVER see a gay organization endorsing a PSA with that content.

You are not LGBTQI Stonewall? NO! You are gay men intent on destroying our communities sense of self respect and dignity.

Does Stonewall UK have a anti transgender agenda? You bet your ass you do.

Just two yeare ago Stonewall refused to change it's choice of transphobic Julie Bindel as journalist of the year despite the outcry from the transgender community.

This year's Stonewall's transphobic choice of transphobic journalist of the year is Sun columnist Bill Leckie who is infamously noted for this article describing his reaction to watching transgender patrons exist a bar Mr Leckie wrote: “Eight o’clock on Wednesday and an army of frighteningly ugly women are pouring into a boozer called Prism for bingo night. Or at least from a distance they LOOK like women.”

"Stonewall Scotland, which is a subsidiary of Stonewall UK, said that although such writing was “probably intended in a spirit of light heartedness”, it was “prurient” and made fun of trans issues."

Stonewall UK despite the overwhelming evidence that Leckie is transphobic unbelievably defended their decision because he had recently written a (very courageous) article about gay footballer coming out.

S*onewall folding under pressure was not a moral decision. Stonewall rescinded the choice this year's journalist of the year under threat of again being targeted by the largest transgender protest as was the result of their persisting on retaining Julie bindel. 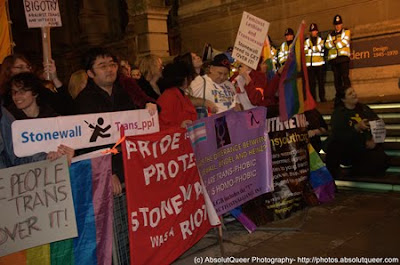 Stonewall UK a transphobic misogynistic organization is regularly called on to advise the goverment on transgender issues despite there being readily available transgender organizations.

PSA "Then am I transsexual?" asks a Q fem youth group response "Lot's of girls are tomboys when they are young but then they you know, grow out of it." Again, BULL~SHIT unbelievable.
Posted by planetransgender at 10:35 AM 3 comments: Links to this post