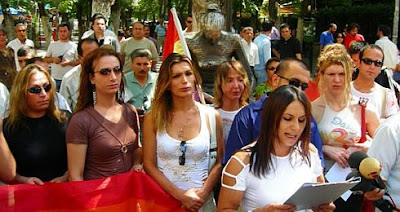 TransAction ConVergence joins with Episcopalian TransEpiscopal in calling for the imediate release of five transgender activists beaten, gased, falsely charged and held for trial on Oct. 21 2010.

(New York, October 18, 2010) Prosecutors should investigate the attacks against five transgender rights activists by police in Ankara and drop all charges against the activists, five human rights organizations said today. In a letter to Turkey’s Interior and Justice ministers, the rights organizations said that the police officers responsible for the attack should be held accountable and called for an end to violence against toward transgender people.

The five activists from the Ankara-based transgender rights organization Pembe Hayat were arbitrarily detained and beaten by police officers on May 17, 2010. Following a familiar pattern in Turkey, the five were speedily charged with resisting the police, before the prosecutor had concluded an investigation into their complaint of ill-treatment. Their trial is set for October 21. If convicted, they face up to three years in prison.

"Police ought to protect transgender people and their advocates, not attack them," said Hossein Alizadeh, Middle East and North Africa regional coordinator at the International Gay and Lesbian Human Rights Commission. "When police turn into perpetrators, it becomes painfully clear that official apathy allows leeway for attacks on transgender people."

Four police officers from the Esat Police Station stopped the car the in which the activists were riding at about 10:30 p.m. on May 17 and accused them of intending to commit sex work. The women –Yeşim (Duru) Tatlıoğlu, Buse (Bülent) Kılıçkaya, Türkan (Deniz) Küçükkoçak, Selay (Derya) Tunç, and Eser (Nehir) Ulus – phoned for help, prompting 25 local human rights observers to go to the scene. The police forced the five activists out of the car, beat them with batons, kicked them and sprayed them with tear gas. Witnesses told the human rights organizations that the police screamed at the activists, "[f]aggots, next time we will kill you!"

"The Turkish government is turning us trans people into criminals, for no other reason than existing. Being trans in Turkey means being judged and condemned just because of what we are," said Mauro Cabral, co-director of Global Advocates for Trans Equality (GATE). "We are the crime: the government abuses us and forces us to live and die outside of the law, instead of protecting us."

Police handcuffed the women, forced them to kneel, and beat their heads and legs while one policeman told them their activism would not protect them. All five women, visibly bruised, were forced into a police van and taken to the police station. Police held them in custody until the next morning. They were officially charged on June 18, 2010.
Full press release (IGLHRC) Turkey: Drop Charges Against Transgender Rights Defenders

The Rev. Cameron Partridge of TransEpiscopal has this to say:

"We stand in complete solidarity with the five transgender activists as they go on trial in Turkey . We pray for their release, for the recognition of their human dignity, and that those who have treated these women in such a dehumanizing way would be held accountable for their actions. As we move toward Transgender Day of Remembrance on November 20, when communities around the world remember those who have died because of their gender identity or expression, we work to transform cultures of violence into spacious communities in which all of us can be who we are."

Please join TransEpiscopal, Integrity and other major international human rights organizations by expressing your concerns to the two Turkish Ministers:

TransAction ConVergence. Transgender, Transsexual, Intersexed, Asexual, Gender Gifted and Allied people converging on Facebook, the world's largest social network, to share news and ideas and to advocate.
Posted by planetransgender at 10:30 AM No comments: