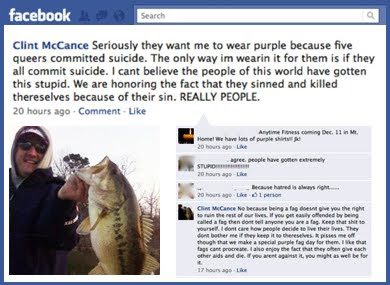 Pleasant plains Arkansas population 267 give or take a couple of queers that kill themselves if of school board member Clint McCance has his wish.

The Midlands school district website has removed all pictures and contact information. The district issued a statement condeming McCance's statement but distanced itself from him saying he acted as a private citizen.


Tens of thousands of angry concerned citizens LGBT and heterosexual agree on one thing, he should be fired immediately. A school board member should never wish death for his students regardless if he is acting as a public official or a private citizen.

The concerned citizens also agree hate speech is unacceptable from anyone. Condemning children publicly to death is inexcusable regardless if someone is from a major metropolitan area or as in McCance's situation, a rural community. There is no excusing someone for wishing children dead. Period.
Posted by planetransgender at 8:55 AM No comments: