Petition the American Psychiatric Association: Remove Transgender from Proposed Changes in the DSM-5 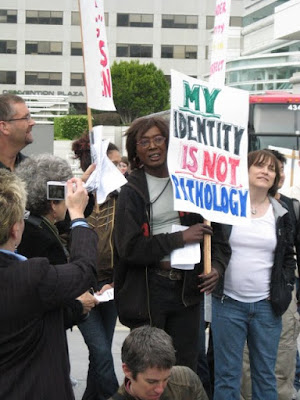 Becuse our Identities are Not Disordered

The DSM is regarded as the medical and social definition of mental disorder throughout North America and strongly influences international psychiatric nomenclature.

On January 10th, 2010, the American Psychiatric Association released proposed draft revisions for the Fifth Edition of the Diagnostic and Statistical Manual of Mental Disorders (DSM-5) to be published May 2013.

Although the proposed changes for the DSM-5 has substituted "Incongruent" a less offensive word for "Dysphoria", the ramifications of this diagnosis still exists as illustrated recently by our exclusion from the DADT repeal.

Transgender people's civil rights advancement has been and will be severely limited by our diagnosis in DSM as mentally ill by the American Psychiatric Association.

Anti transgender organizations cornerstone evidence for our dehumanization is the DSM which links our identities with with autogynephilia and pedophilia. Without fail the roundhouse blow during our engagement with anti trans forces has been delivered by quoting the DSM prognosis of our 'mental illness'.

Our diverse gender identities are a natural gift, not a psychiatric disorder.

There are arguments we would be "cutting of our noses in spite of or faces" by getting our gender diversity de-listed in medical references as a treatable pathology. That is not my opinion. Why would a perfectly normal socialy functional human be satisfied with being labeled as mentally ill?

GID Reform.org
Posted by planetransgender at 10:42 AM No comments: Links to this post