Why We Protest Rick Perry's AFA Day of Prayer 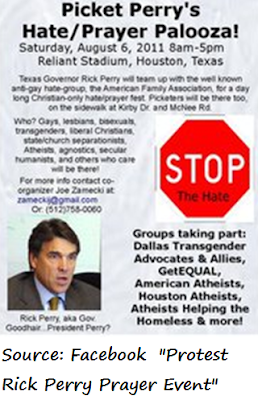 Her crime? She played the transgender character on Degrassi. Read Sarah's blog post "Integrity" describing her outrage at the hatefulness of the emails.

"Degrassi, which first aired in 1979, is known for portraying controversial issues. Over the course of its 30-year run (which has included several hiatuses and cast changes), it has covered teen pregnancy, school shootings, cutting, homosexuality and gonnorrhea outbreaks, to name a few. The show didn’t come to FFA founder David Canton’s attention, however, until last year, when it introduced a storyline about a gay quarterback and one about a female-to-male transgender teen exploring his identity and first relationship.

Canton told The Huffington Post that the LGBT content “licentiously appealed to the prurient nature of teenagers,” saying he believed that the scenarios also promoted behavior that doesn’t naturally occur in high school settings.

“How many high schools have a gay first-string quarterback who becomes lovers with someone else on the team? This relationship is extremely unlikely and they shouldn’t open this to dialogue,” Canton -- once applauded by American Family Association president Don Wildmon as the "quarterback" of the pro-family movement -- said. “And I think that it is statistically improbable that you will have a female-to-male transgender who is in love with a lesbian or bisexual in a school setting.”


On Facebook join with Jd Mason and Joe Zamecki to Protest of Rick Perry's Prayer Event which has outstanding ride share resources.

The Dallas Transgender Advocates and Allies protest page
Posted by planetransgender at 11:20 AM