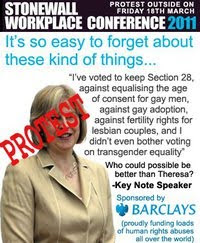 Stonewall UK profiting by trading with the enemy.

UK Stonewall, a GLB organization with out a transgender inclusive mission statement renowned for its transphobic speakers in 2008 and 2010 is now being funded by Barclays the worlds tenth largest bank.

This UK mega bank, Barkley once thought itself unresponsible to its moral obligations, comes in at number 22 top gay employers by Stonewall despite being recently fined $298 Million by the United States Department of Justice under Emergency Economic Powers Act and the Trading with the Enemy Act Charged, Barkley simply paid the fine and walked away without criminal charges.

"According to court documents, from as early as the mid-1990s until September 2006, Barclays knowingly and willfully moved or permitted to be moved hundreds of millions of dollars through the U.S. financial system on behalf of banks from Cuba, Iran, Libya, Sudan and Burma, and persons listed as parties or jurisdictions sanctioned by OFAC in violation of U.S. economic sanctions."

"Criminal activity of the type we found at Barclays does more than deceive our financial institutions, it threatens the security of our country," said District Attorney Cyrus R. Vance Jr."

"The UK LGB charity" Stonewall has now published its Top 100 Employers 2011 showcasing Britain's best employers for gay staff. It names the Home Office as the best place to work for lesbian, gay and bisexual people. 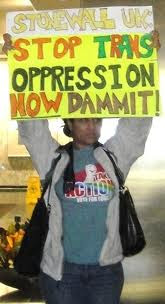 Home Secretary Theresa May the honour of opening their Workplace Employers Conference.

This is the same person refused to intervene in the High Court case of a Lesbian Asylum Seeker fleeing torture in Uganda, the same week gay rights activist David Kato was murdered for his beliefs in the same country.

Most LGBT people don't need to be reminded of the May's long history of voting for homophobia during her time as an MP. She claims she is sorry bit her refusal to allow persecuted LGBT people to stay in the UK, leaving it to the courts causing years of heartache of despair shows she has not changed at all.

With the Home Office receiving the award for best place to work for LGB people, Stonewall however picked a winner that leaves us with a bitter taste. Theresa May is NOT suitable for the role of Equality Minister, let alone address some of the most influential people in the country at a leading 'equality summit' - which is also sponsored by BARCLAYS BANK which funds violent dictators and arms manufactures around the globe.

London NoBorders condemn this decision of Stonewall and would like to remind them of their key priorities and the historical background of their chosen name.

Gay Mafia Watch has more on this.
Posted by planetransgender at 7:58 AM No comments: Links to this post