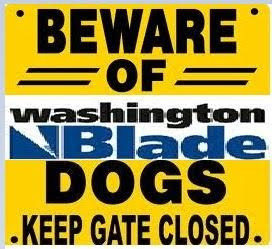 A true monument to the gay Mafia's media machine is the Washington Blades article about the Maryland bill HB235.

This planetransgender article will remain as a tribute to gay.com's insidious malevolent misinformation campaigns that are mounted whenever the gay agenda comes in conflict transgender peoples well being.

The transgender community was anticipating a major disinformation blitz by IN-eq MD once the inequality of HB235 without public accommodations hit the mainstream media.

We knew once HB235 broke into mainstream media EQMD would unleash the gay media machine dogs of war and here's what started it:

I have been the lead sponsor or lead cosponsor of the Gender Identity Antidiscrimination Act for the past four years. In advance of the 2011 Session, I had a bill drafted that is identical to the bill I had introduced previously. This draft prohibited discrimination based on gender identity in employment, housing, and public accommodations. However, our advocacy coalition asked me to not introduce the bill, preferring a strategy of pursuing a House bill alone. This approach has not diminished my commitment to enacting these much needed protections, and I urge the House of Delegates to pass HB 235, with an amendment that prohibits discrimination against transgender individuals regarding public accommodations.

Providing transgender individuals with basic protections against discrimination is long overdue. Although much of the media attention this legislative session has centered on marriage equality, we cannot let that debate overshadow efforts to enact these essential protections. Protection against discrimination, including gender identity discrimination, is a basic human right. Our state laws must reflect the values of equality and equal opportunity – values that are central to who we are as Americans.

Many transgender advocates have posted comments on this Blade article but as of 8:00am ET none are published.

Censorship at its dirtiest lowest form oppressing a disadvantaged minority who are opposing legislation furthering degrading their condition.

"Opponents of the bill, led by some of the same anti-LGBT groups that oppose same-sex marriage, often have cited religious beliefs as grounds for denying non-discrimination protections for transgender people."

That is a disingenuous LIE designed to equate transgender Marylander opposition to this bill with the group NOT IN MY SHOWER that had previously led the disinformation and hate inspired fight against transgender rights in Maryland.

NOT IN MY SHOWER and other right-wing anti marriage quasi religious groups have remained SILENT about HB235. They GOT what they wanted, HB235 would insure we are not in their shower.

BTW Chibbaro transgender bloggers such as myself are writing about this atrocity otherwise it would have remained the token unknown sacrifice for marriage equality that "Equality" Maryland had intended it to be.

And to all those who point out that many who oppose this bill are "out of state" as you did Chibbaro I want to remind YOU that "Equality" Maryland a federation member receives a great deal of financial support from OUT OF STATE fund raisers by the MEGA GAY.COM HRC!

I would also like to remind you Chibbaro why we out of state people are so concerned. As a former resident of Cockeysville MD I am aware of the potential fallout if the bill should see the light of day as other FEDERATION members may also grasp at this outrageous sacrifice of transgender rights to further there own gay agendas.

We knew we are underdogs and I have personally been gang attacked by gay media in the past but this is truly disgraceful.

Washington Blade lies and disinformation. YOU should be ashamed.