In response to the protest equality Maryland shut down the transgender Baltimore "working groups" until after the legislative session ends. This unprecedented act of censorship by any federation member was preceded by equality Maryland banning members and deleting opposing messages on its facebook page. These two combined actions effectively eliminates all voices but those who fully support HB235 without public accommodations and the failed marriage bill strategy.

Prior to this announcement there have been two "meetings" held by eqMD about HB235. One was unannounced and the second one any and all transgender opponents of HB235 were shouted down by eqMD staffers.

These two sham meetings are what equality Maryland has touted as its source of input from the greater transgender community They are to be discontinued according to a message received by a participant of the preceding 'Gender Identity work group meetings'.

The message from equality Maryland:

Due to scheduling conflicts, the transgender issues working group meeting originally scheduled for tonight has been postponed.

Thank you for coming out to Baltimore these past few weeks, lending your time and your voices to the ...discussion.

We believe these meetings have been constructive. We are committed to continuing these conversations after the legislative session so we can best formulate a coordinated, long range educational and legislative agenda.

We look forward to continuing this important dialogue. The next meeting will be scheduled for Wednesday, April 13th at 7:30 PM in the Equality Maryland offices. At that time we hope to have a system in place that will allow folks to join via a conference call. We'll keep you posted as the date draws closer.


We are of course aware that some members of the group disagree with the strategy behind HB 235. For those who are interested in supporting this legislation, please consider getting in contact with our deputy field director, Aimee Martin at aimee@equalitymaryland.org.(all others, fuck off and die)
We're committed to bulldozing over the transgender community now, and hope you'll join us.<
We look forward to seeing you on April 13th. (after the legislative session ends) 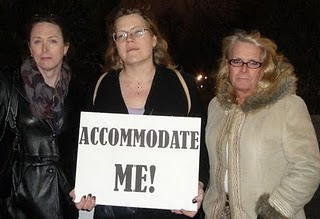 
Equally troubling is the revelations that equality Maryland did not make the decision to pull the marriage bill before the Vote. Apparently out of state interests manipulated that decision.
.
Most troubling to transgender people is HRC's control of the issue.

We are fully aware that HRC would like nothing more than to get ENDA enacted and be rid of the transgender menace. The hold up on ENDA is of course public accommodations! HB235 sets a extremely alarming precedent by eliminating public accommodations as a component of states civil rights and could be used as a example in national bills.

Undoubtedly HRC and its sock puppet NCTE would love that.
Posted by planetransgender at 6:42 AM 1 comment: