Why the Hell is Queerty using the same Demoralizing Sprint Transgender Image? 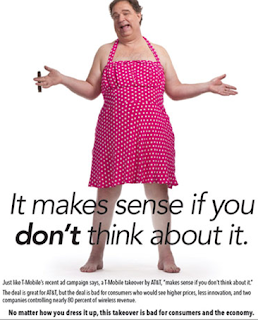 Why does Queerty use this problematic image to promote its otherwise excellent article warning of the danger to the freedom of the Net resulting from the proposed T-Mobile and ATT Merger?

Because Queerty like most of gay media believes it can use the transgender community at will, regardless if its damaging as long as the outcome promotes the gay agenda.

The Queerty article does a great job pointing out the duplicity of the corporate funded Gay rights organization GLAAD, but it does so by publishing a picture a cisgender led company previously apologized for!

Queerty made no mention of GLAADS refusal to confront transphobia enabling the gay agenda like its own regurgitation of this picture, instead it used the low road actually promoting its argument with the same same transphobic picture!

GLAAD isn't alone ignoring us for a buck,

Pride at Work Facebook note "Why Mergers Matter for LGBT Workers makes no issue of the inflammatory picture or ATT's role in Tennessee's HB 600. Transsexual activist Michiko Ota Eyre comments on the note 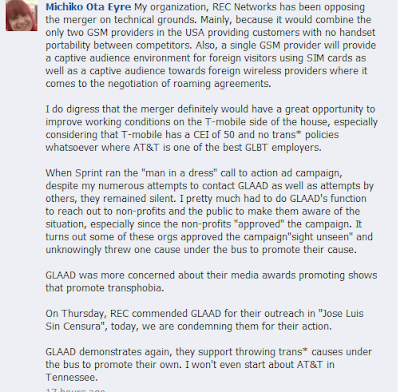 Gay people, its not embarrassing to be a woman.

When will we get the respect we deserve?
Posted by planetransgender at 8:12 AM 1 comment: Links to this post