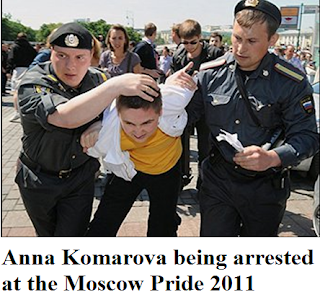 The 2011 Moscow Pride is now history, ending much like previous years with the Russian government doing its best to crush it. But this year, unlike most previous pride events it was held in the time and place as advertised.

And this year the authorities choose to ignore international law abdicating their social responsibility. Witnesses reported seeing the police facilitate the criminals who assaulted the LGBTQ marchers then violated international law by arresting them.

But the big news is for the first time in Russia a person who identifies as Genderqueer was visible as a leader of the Russian LGBT Pride Parade. This years pride also garnered additional international media attention by the arrests of gay rights activists Dan Choi and Peter Tatchell.

I wanted to get to know this man, GenderQueer Anna Komarova. I wanted to explore what makes him tick. What makes this person live authentically day to day in his country where such audacity is often rewarded with violence and even death.

This is a interview with Russian Transactivist extraordinaire Anna Komarova.

Kelli Busey: "You do not want to be identified as female, tell us about your identity?"

Anna Komarova: "Of course I feel myself under the transgender umbrella. My speech at the press-conference of Moscow Pride was about transgender rights including transsexuals, transvestites and genderqueers. And my sign at Moscow Pride was "Trans rights are human rights". But I was arrested immediately as soon as I took it out of my pocket. So I couldn't even to fold it out."

AK: "I don't hide my identity anywhere and I face a lot of problems. People reject my gender identity at my job. For example, they refuse to use masculine gender when they talk to me. I'm not a transsexual so I can not say them that I will reassign my sex in documents and the sex in my documents will coincide with my gender. I can't get the documents which reflects my gender status. (That's why I'm sure that it would be better to kick out any gender and sex labels from our documents. And it would be better for realization of gender equality by the way. We say a lot about gender equality but there is no one country which stopped to use gender (sex) labels in documents. That's enough if there would be an option to point your gender (sex) if you would like to do it but gender signs shouldn't be necessary in personal documents.) It's easy to lose your job if you aren't a cis-gender and if you would like to be opened in your gender identity there. It seems to me that it's almost impossible to get a job with a high status if you are a genderqueer."

KB: Were there other Transgender people at the Pride Parade?

AK: "And there was another one transgender at Moscow Pride 2011. He is a member of GayRussia since 2007. And one more MtF transgender took part in our actions a lot of times in 2010. And I hope she will take part in them in future."

AK: "I took part in TDOR in St. Petersburg in 2010. It was the first authorised

LGBTQ-action in St.Petersburg and the second one in Russia after the decision of European Court of Human Rights which said that bans of Moscow Prides 2006-2008 were unlawful."

KB: The Orthodox Church in Russia has spoken out against Pride. Are there any religious institutions welcoming to LGBTQ people in Russia?

AK: "There was a small Orthodox church which was independent from Moscow Patriarchy and which openly accepted LGBTQ. And I heard about Judaic church which accepted LGBTQ. I know nothing about both of them now. But there are small communities of LGBT Christians in Moscow and in St.Petersburg."

KB: What is it like the days before this PRIDE knowing it would end in bloodshed?

AK: "Usually I absolutely quiet at the pointed days of dangerous actions. But I'm nervous some days before them. At the day of Pride I think about my aim to realise what I planned and nothing more. I feel nothing. Maybe it's difficult to be nervous several days in a row before Moscow Pride but anyway I feel pleasant quietness inside me at the day of Moscow Pride. I'm single so I spend all my nights and mornings with my comrades before Moscow Pride."

KB: Tell us about your arrest at the 2011 Moscow Pride Parade.

AK: "I was arrested in a few seconds. Police attacked me from behind, turned out my arms and I found myself on my knees with my head near the ground. Somebody kicked my by my head 2-4 times and then I was led to a police car where counter protesters were and the correspondent of Novaya Gazeta Elena Kostyuchenko was. Elena came out at her blog at the day of Pride, took part in Moscow Pride, was beaten, was arrested, then she spent several days at a hospital and she is at home now. What about me: I got a brain concussion at Moscow Pride 2007 but this year I'm fine. So I'm glad. I think that I have to appear before a judge. Police filled all the forms when I was at the police station."

KB: Are there risks to being a activist in Russia?

AK: "I think that there is some risk to be an LGBTQ activist indeed. And I remember the soviet period of our history so I've never dreamed to be a public man. I'd like to be a photographer. But I can't hide my identity so I have to fight."

AK: "I like queer theory, I reject gender and sex binary and fixed identities. I like monogamy families and I like poligamy families as well. I say that I'm a transgender, a genderqueer but really I'm totally queer."

KB: what are your plans for next Pride Parades?

AK: "What will be the next year? Nobody knows. We will see." 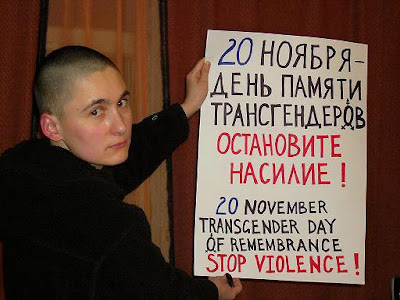 Anna Komarova Facebook note "My speech about transgender rights at the press-conference of Moscow Gay Pride 2011."

novayagazeta.ru “We need ordinary flathead families to learn about gays”
Posted by planetransgender at 7:55 PM No comments: Links to this post