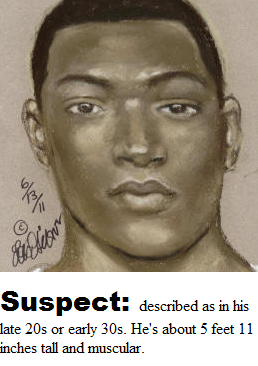 Nathan Eugene Davis died in the shooting, which occurred at the Canfield apartments at 13333 Northborough near Rushcreek about 12:30 a.m. Monday, according to the Houston Police Department.

Police said officers who were dispatched to the complex on an emergency call about a shooting discovered Davis lying in the parking lot behind a trash container. Homicide investigators believed he was shot where his body was found, police said.

Davis was wearing a red dress, makeup and a wig, HPD Sgt. Colin Howard said today during a news conference when the sketch was released. Howard said Davis's friends told investigators Davis dressed as a woman.

Witnesses said they saw a man running from the area moments after the gunfire, Howard said. They also said they heard him talking on a cellular phone and that he wanted to be picked up. -->The Houston Chronicle

Posted by planetransgender at 3:23 PM No comments:

Get it for FREE! One Issue of FROCK the HOTEST TG Magazine EVER! 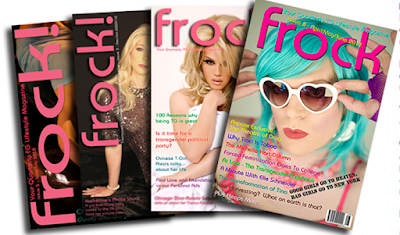 My Editor at FROCK the fastest growing online glossy TG magazine wants me to give it away for free. One Free copy that is. I love FROCK. Its informative, entertaining, a little sexy and the activism is in your face!

Posted by planetransgender at 8:13 AM No comments: