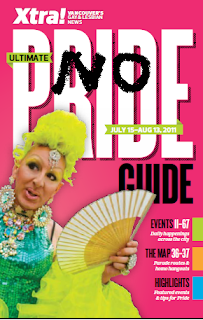 Reading the Vancouver Pride Guide I could not find the word transgender or transsexual. Gay, queer, lesbian and drag out the ying-yang but transgender was not mentioned. Not even once.

This fact has has not escaped the notice of a outspoken transgender Vancouver resident, Tami Starlite, who then organized a "Trans Celebration & Liberation March"in protest of trans exclusion by the Vancouver Gay pride.

Blyth told straight.com “We wanted to provide some sort of framework and some support for the trans community, to say, ‘We want to show that visibility’—on our terms, not on their terms,” Blythe said by phone.

No BBQ on the patio for TAMI. 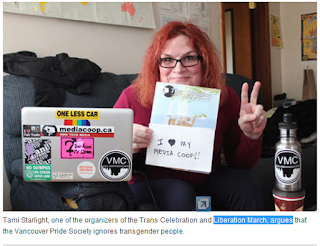 Tami was vivid about this. She replied to my inquiry:

"The BBQ is more tokenism. People do not understand that by definition we are not part of mainstream society. GrrrrrOWL! We should not be - as I stated in my reply to the article. PRIDE has a history and it is all political and
VERY personal. I have a great admiration to those who do not work within the system. The 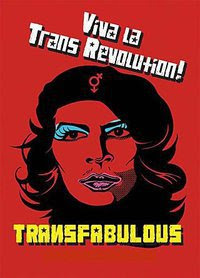 system is patriarchy....capitalist and very ...unequal. Enough of giving this shit show our energy.....time to move forward as a society....stagnate as we wallow in our privilege. Shame on the Gay & Lesbian community for allowing the trans and bi people to be token and erased.!!!!"

It may be just as well because transgender people might not have been allowed to march under there sign anyways. It seems any signage slightly political in nature will be a No NO.

Cross posted from The Transexual Menace
Posted by planetransgender at 9:13 PM 2 comments:

From BlogTalk Radio recorded July 11th "On August 6th, Governor Rick Perry will be holding a prayer event called The Response. Now...we don't care that a bunch of fundamentalists are getting together to pray for the country - that's the freedom that makes us unique. What we DO care about is the fact that he has teamed up with the American Family Association and a bunch of bigoted hateful people who are anti-gay and anti-every other religion.
Listen to internet radio with ForwardBlitz on Blog Talk Radio
In response to The Response, a protest will be staged - bet on it. Our guest on Monday will be Kelli Anne Busey, a journalist for Planetransgender and one of the organizers of this protest.
Posted by planetransgender at 8:54 PM No comments: