As reported earlier by the Dallas Voice it was hoped that the largest institution of higher education in Texas, the Dallas County Community college District with about 80-thousand students and 9-thousand employees would add gender expression and identity without debate to its non discrimination policy, but it appears this will not be the case.

It has been common practice in the past that if the administration proposes something and backs it, the board almost always approves it. However this time it was different. The board in a closed door meeting decided not to add transgender protections.

In an effort to explain the boards refusal to consider adding gender identity and expression to their nondiscrimination policy their attorney sent this letter to our lead advocate Rafael McDonnell, Communications and Advocacy Manager, Resource Center Dallas: 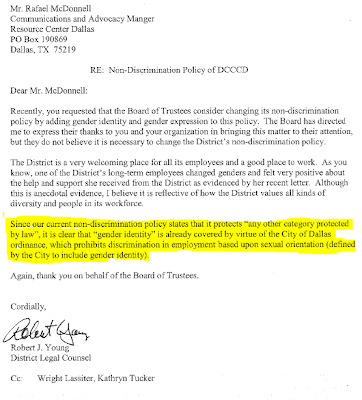 McDonnell sent me this in response to the DCCCD letter:

"The DCCCD's decision (claiming that they are covered by the City of Dallas" nondiscrimination policy) is based on two flawed tenets:"

Number one being the City of Dallas’ nondiscrimination ordinance explicitly does not cover governmental institutions, which is interpreted to be any body that in part or whole gets money from taxes.DCCCD gets money from property taxes, so it is exempt (from the Dallas nondiscrimination policy). They would have to amend their policy to specifically include gender identity and gender expression."

Phone calls to the School Chancellor Dr. Wright Lassiter have not been returned as of this time however Ann Hatch media contact for the DCCCD returned my call. After I explained my concerns she contacted the attorneys who had sent McDonnell this letter. She later left a voice mail explaining the lawyers will send McDonnell another letter and apologize for the first letter.

However Hatch said the board of regents decision remains unchanged. The board feels that should a transgender person feel they are being discriminated against they should file a claim under sexual orientation because sexual orientation and gender identity are the same.

The premise that by association with lesbians and gays transgender people are protected in nondiscrimination polices is false. Just two months in ago September a Houston Community College teacher called transgender people “freaks” and “weirdos” and since the Houston School does not have implicit protections for transgender people that 'teacher' may get a talking to, if anything at all.

This is unacceptable, that Houston teacher should have been suspended immediately and would have been had Houston had transgender protections in place. 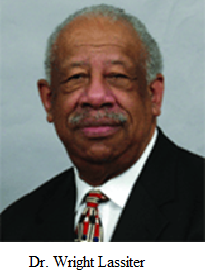 the outcome if a teacher at one of the DCCCD colleges were to say black people were 'lazy and smelled bad'?

The Dallas Transgender Advocates and Allies recognize the need to implicitly protect gender expression and identity and call on the DCCCD to implement those protections now.

This evening, the Resource Center Dallas asked DCCCCD Chancellor Wright Lassiter to schedule a Dec. 6 board vote to add transgender nondiscrimination protections for students and employees. Please call his office at 214-378-1601 or email wlassiter@dcccd.edu. and make a similar request.