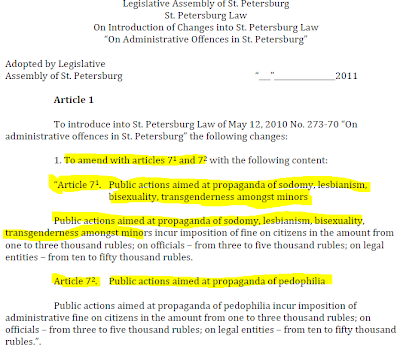 The police simply stand by as St Petersburg pride celebrants were beaten this year but thats not enough for Putin. This purposed amendment to a St Petersburg law would further criminalize public 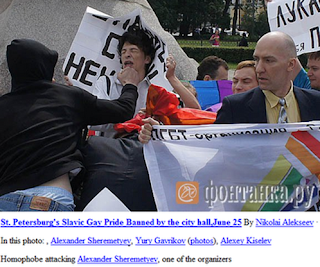 gatherings of LGBT people equate us with pedophiles effectively banning all transgender, lesbian and gay gatherings be it for social functions like a picnic or activism events.


The world is responding by petitioning the Russian government not to enact this draconian law. This English translation can be found on Moscow resident Anno Komarov's facebook page:

"Against the adoption of the St. Petersburg law restricting freedom of association, peaceful assembly and freedom of expression
Category:
Public law regulation, laws and legislation
Region:
St. Petersburg
... Author:
Semenov, AA
Maintained by:
Organizations do not
№ 5832
Gathering signatures.
Donate
Description
Документы (1)
Voted (525/19)
Comments (22)
История (2)
Against the adoption of the St. Petersburg law restricting freedom of association, peaceful assembly and freedom of expression
in the Legislative Assembly of St. Petersburg
St. Petersburg Governor Poltavchenko GS COPIES Commissioner for Human Rights in the Russian Federation, VP Lukin, Commissioner on Human Rights in St. Petersburg, AS Kozyrev Ombudsman for Children in St. Petersburg, SJ Agapitovoy November 11 faction "United Russia" made in the Legislative Assembly amended the Law "On Administrative Offences in St. Petersburg." "United Russia" proposed to introduce administrative liability and impose a fine for public action aimed at the so-called "propaganda of sodomy, lesbianism, bisexuality, transgender," and to promote pedophilia among minors. We, the undersigned, urge you to pay attention to the use of improper language in the law and definitive substitution of concepts. We consider it inadmissible to compare the public mention of homosexuality, bisexuality and trangendernosti propaganda of sexual crimes against minors (pedophilia). We consider it inadmissible to the adoption of this law to homosexuality, bisexuality and transgender as a normative act, which violates the basic rough shape human rights (as well as groups and organizations) to freedom of expression, association and peaceful assembly enshrined in the Constitution of the Russian Federation, as well as a number of international human rights instruments. We believe that the law contributes directly to the feuding and an increase in xenophobic attitudes in society . We ask you not to allow adoption of the Act without proper public hearings, taking into account the full range of scientific views of the Russian and the international community, as well as peer review. We urge the authorities to respect the Constitution, in which the protection of human rights is the highest value. We ask the authorities to pay attention to the significant risk of the consequences that inevitably follow in the event of adoption of this law, namely fomenting xenophobia against homosexuals, bisexuals and transgender people, fomenting discord in society and the increase in aggressive mood among the population."