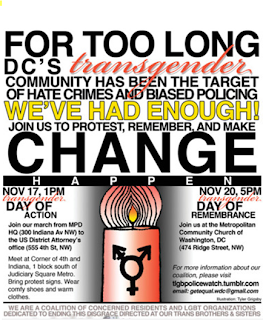 WHAT: Transgender Day of Action
WHEN: Tuesday, November 17, 2011, starting at 1 PM
WHERE: MPD Headquarters (300 Indiana Avenue NW) to the US Attorney’s Office (555 4th Street NW)
and City Hall (1350 Pennsylvania Avenue) in Washington, DC
WHY: The Trans community and its allies throughout the city come together to demand change.
HOW: Activists deliver a set of written demands with date certain expectations and consequences.
WITH: Transgender Day of Remembrance at MCC on Sunday @ 5 PM (474 Ridge Street NW)


The grim media reports trumpet the District’s rise in violent crime against Trans people, including two murders this summer, LaShai McClean, 23, on July 20, and Gaurav Gopalan, 35, on September 10, while experts contend that crimes against Trans people are generally underreported or misreported by the police. And, MPD’s clearance rate for assaults and murders involving trans victims is just a quarter of the average rate, 20% versus 80% of crimes solved, respectively, according to Police Chief Lanier.

Late August brought together a dozen community organizations in a coalition called DC TLGB Police Watch, all determined to bring immediate, systemic, and sustainable change to the District. TLGB, rather than LGBT (Lesbian, Gay, Bisexual, and Trans people), is part of the group’s name to signal its primary focus on Trans issues. These activists intend to continue bringing public pressure on elected and appointed officials to seriously address this crisis that, sadly, includes anti-Trans violence and unconstitutional profiling by MPD officers.

DC TLGB Watch includes the local organizers of the annual Transgender Day of Remembrance, this year scheduled for Sunday, November 20, at the Metropolitan Community Church. Each year the Trans community and its allies solemnly gather to honor murder victims and their families. The Transgender of Action was conceived to honor these victims, as well, by bringing advocacy to the streets and sidewalks.

We invite you to download the the group’s goals and demands and color Poster, listen to the TransFM interview with Alison Gardner and Ruby Corado regarding the day of action, and find more info at Facebook/Transgender Day of Action or TLGBpolicewatch.tumblr.com.