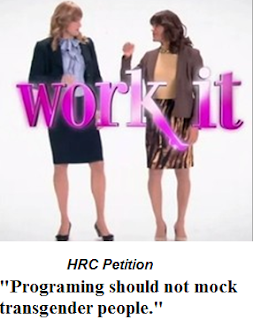 The Human Rights campaign true to form once again ignores grassroots advocacy and commits to an action without even as much as contacting the people it portends to advocate for.

We saw that recently with DADT. HRC didn't repeal DADT the people who chained themselves to the White House fence did. HRC was acquiescenting to political pressure and would have remained silent if not for Get Equal and friends.

Just like they did when Barney Frank divided ENDA into two separate bills one sexual orientation the other gender expression. HRC would have remained silently complaisant if not for us protesting on their doorsteps.

HRC has unilaterally begun a separate petition to ABC after Joe Solmonese' request to moderate Work IT were ignored. Maybe that was fortunate because the very idea that Solmonese could be in a position to create social conscripts regarding the treatment of transgender people in television sends a shiver down my back.

A well intentioned cisgender friend alerted me to the HRC petition. She posted on my facebook wall

"Thanx Kelli Anne Busey for getting the ball rolling on petitioning ABC about this disgusting show. Now HRC has a petition as well please sign let people know that mocking women is not funny."

We didn't just "get the ball rolling" so gay.com could bulldoze our efforts at self empowerment for the sake of self promotion! 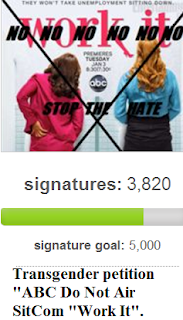 We are the ones who are directly suffering from the images ABC is promoting. We are the activists who have a successful petition without so much as a peep from gay.com's media mafia.

As divisive as HRC's efforts are I am not discouraging anyone from signing HRC's petition but I ask you if you do so, sign the petition from the transgender community also.

HRC's petition probably will no more stop ABC from showing Work it than our's will but its about a whole lot more than that. Regardless of the outcome its about transgender empowerment. Its about us taking responsibility for our community. Its about our gay and lesbian allie's support. Its about a world of cisgender people who object to the dehumanizing effects of Work it's images.

It's not about this battle specifically. Its about transgender people joining the world to do the right thing.
Posted by planetransgender at 3:44 AM No comments: Links to this post