What, RuPaul the Clown again? 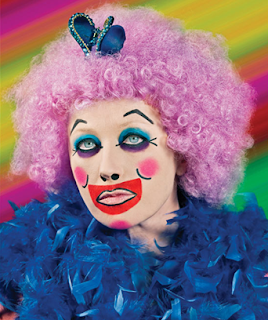 Bring in the clowns, or as Marty so eloquently wrote at the TransAdvocate Rupaul: Fuck You You Silly Faggot

Seems Rupaul's is trying to drum up support for the next season of the tired drag show and as usual he's doing so by offending the sensibilities of the transgender community.

But this time he feels like the one being offended attacking GLAAD who FINALLY begun calling out gay men for using defamatory language.

"Politicians are really like show people, people in show business -- except that they have not as good costumes in politics. You have to appeal to the masses in show business. You appeal to Betty and Joe Beer Can. For someone like Obama to survive -- he's a very smart man -- he's had to do some dumb things because people don't want the truth. It's the same thing with drag."~Huff Post

In essence Rupaul says politicians and actors are the same in that the abdicate morality to play a popularity contest. I'm sure there's at least a few actors and politicians who would also say you are not speaking for them!

"RuPaul is an opportunist and a tool of the oppressor, with her tired-ass drag diva stereotypes. Thank God we have an increasingly activist Transsexual population that takes crass exploitation seriously. Their high degree of consciousness puts the so-called "Gay community" to shame."

Don Charles blogs over at Ignorance is Plentiful, and like me has been banned from commenting on many gay rags for speaking up.

Rupaul is much the same as the gay man, Sand in the Crack who recently featured in the Tampon ad. Both are perfectly willing to sell their souls for a dollar regardless of the consequences to other human beings.

But RuPaul is extraordinary horrible in that he tries to speak as a authority for transgender people.

You're nothing but an immoral gay clown RuPaul who's good at playing the popularity game appealing to the same.

Sending that clown away with a flick to the forehead. flick.
Posted by planetransgender at 11:17 AM

With the rapid advances in knowledge, several techniques were used to create the vagina; however, Dr. Juta”s technique is one of a kind, “The Scarless Sexchange” wherein there will be no visible scar on the labia majora after the operation. Certainly, he is the only doctor performing a high quality SRS “Scarless Sex change” in Thailand today. With Dr. Juta, you can achieve a successful outcome both in appearance and function, and there are far lesser incidents of complications. The goal of Doctor Juta is to create female sexual organs that look as natural as possible and that allow as much sexual arousal as possible.