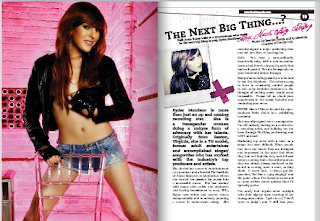 I had the pleasure of interviewing upcoming pop singer song writer Ryder Morrison for the March issue Frock Magazine and I'd like to share some of that.

Ryder Morrison (formerly known as Ryder Monroe) is more than just an up and coming recording star, she is a transgender woman doing a unique form of advocacy with her talents.

She is also a transgender person who realized that her potential far exceeded the conditions imposed on her by society. She used that knowledge and faith in herself to begin transitioning into who we know today, an exciting vibrant gifted woman. The next big thing!

Kelli: Ryder, thank you for interviewing with Frock. When we connected on
Twitter I visited your Sound Cloud site. You have a extraordinarily
beautifully voice, with a rich masculine texture but there's a layered
quality that makes it special. You are transgender so your femininity
shines through.

Many of us including myself, are reluctant to use the telephone. Its
embarrassing to have to constantly remind people to call us by
feminine pronouns so the thought of making music would seem
impossible.

Please tell us about your experiences in the music industry marketing
your voice having recently signed with a label.

Ryder: "Mach 1 Music, headed by super-producer Eddie Galan is a publishing company that recently signed me as a songwriter. I'm still actively looking for a contract as a recording artist, and building fan base through youtube, performing, and LGBT* outreach."

"Marketing my voice with a label as a singer has been difficult. When people
first hear my music they are intrigued and impressed at the artist but when they find out that the rich, rock-infused tenor is coming from a beautiful woman, they are almost always confused as the sound is coming from a man, so they think. It never fails. I always get the question,

"But this is a guy singing!?" and the point where I'm forced to come out as
trans* arrives much quicker than I'd typically prefer."

"I've rarely had anyone come outright with their bigotry upon learning of my
transgender status. I get a lot of "I don't want to judge," and "I still love your
music and think you are so talented!" but at the end of the day, once producers and managers learn of my trans* status I can never get a retweet, an email response, or a call back."

"My regular speaking voice, as people can hear in my youtube videos or in
every day conversation with me, is very feminine and actually nothing like my edgy, raspy, singingvoice. What people don't understand is how much muscle control it takes to train a once male-sounding voice to achieve a naturally feminine, passable range.
Almost every trans* singer will tell you it's impossible to train your singing voice in the same waywe can with our speaking voice and maintain the quality and control needed to be successful in the first place. I'd rather be able to sing naturally, and sing well than lose my skill level and authenticity in sounding "female". Unfortunately it's a catch 22for any transgender artist looking to breakthrough in the mainstream music industry."

Kelli: For many Male to Female transsexuals our voices have seemed an almost
insurmountable obstacle to achieving the older concept of 'passing', a
fact not missed as we were humiliated recently by Neil Patrick Harris.
Thoughts?*

Ryder: "I hate the way that people view our community as a whole, even within the LGBT* community, and amongst our supposed "allies". Public figures have been quick to humiliate and deride transgender people as sub-human, and less-than in their rants and more "light-hearted" jokes. A good example of this are noted celebrities Neil Patrick Harris and Kelly Osbourne."

"It upsets me that organizations that are meant to protect the integrity of our community are quick to give these celebrities a pass, and a pat on the back after receiving a quick apology that was more than likely career and politically motivated. Not to mention the so eloquently written articles and blogs these celebrities write in their support of the LGBT* community, which I'm more than convinced are headed up by their PR people. People forget how much words do have an impact. Transgender people are brutally murdered every day, and it's attitudes like the ones the celebrities have matched with the careless tossing around of words to mass media outlets that further fuels this hatred and disgust of transgender people. It's not fair, it's not right and I am so ready to have my soapbox to infect this industry with change." 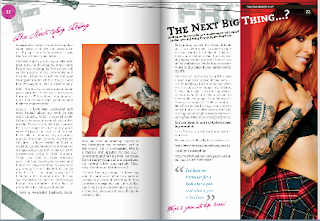 "In the past, gender non-conforming artists like David Bowie, Billy Kaulitz from Tokio Hotel, and even more recently Jefree Star, have been able to easily gain mainstream acceptance and popularity. It's totally baffling and frustrating that as a transwoman I'm looked at in a completely different way. I live my life authentically and everything I am is represented in my artistry and my advocacy. I aim to be America's first transgender pop star and I know this goal is achievable with the support of the LGBT* community here in the states and abroad."

Ryder, I for one will stand with you and do everything I can to see that your dreams are realized.