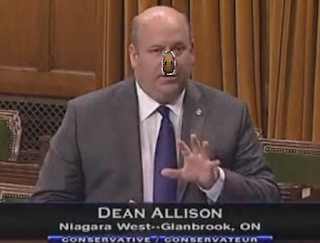 At the eight miniute mark Allison's gesturing becomes more emphatic suggesting that after all was said and done, protecting transgender people under the law would only enable men in dresses to prey on girls in bathrooms. He didn't have empirical proof only validating that statement by recalling the last time transgender Canadians tried to gain protection the same sort of fear mongering defeated it.

But times are changing. Maybe he'd enjoy the Canada Miss Universe Pageant but he wouldn't bring his family because there's a trans contestant and becuse of that there will be lot of men in dresses in the bathrooms attacking children. What a asshat.