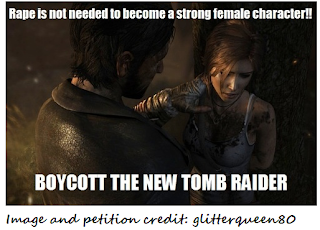 The new Lara Croft is no longer the kick ass amusingly light hearted indomitable Fem Dom in tight shorts according to executive producer Ron Rosenberg she hasn't become "That woman yet".

"In the new Tomb Raider, Lara Croft will suffer. Her best friend will be kidnapped. She'll get taken prisoner by island scavengers. And then, Rosenberg says, those scavengers will try to rape her."

"She is literally turned into a cornered animal," Rosenberg said. "It's a huge step in her evolution: she's forced to either fight back or die."

You can watch the videos here.

So let me see if I got this right. The rebooted Laura Croft is a young sexy vulnerable girl (reads adolescent) who tries valiantly in vain to avoid getting raped and will unless the gamer feels charitable enough to stop it.

Perfect game for the young rapist who lives to see woman sexually degraded to the lowest point. How many times have I as a Walmart cashier watched as a highly indignant parent stalks off after I have refused to sell their under age child a age restricted video game? About as many times as I have see that same parent return with another copy, buy it at another register and hand it to there child while smirking at me.

Please sign the petition Crystal Dynamics: Remove the attempted Rape scene & storyline from 2013 Tomb Raider posted by GlitterQueen80 on Tmblr.
Posted by planetransgender at 9:52 AM 2 comments: