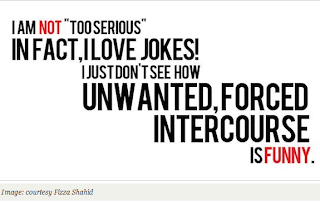 Rufus Ulrik Responds posted on Tumblr is an apology first and a critical introspection examining what led Rufus to think it was OK to joke about rape. His letter also led to my self examination as well.

Yes I did jump at the opportunity to kick Brennan when she was down and did not give a thought to the inappropriateness of Rufus's rape joke. Rape jokes anywhere including Tumblr are morally wrong. Period. So is the way RadFems act towards the gender diverse. Period.

The second half of the letter Rufus confirms in fact Cathy Brennan did maliciolusly out Rufus and then explains that Rufus is not transgender but identifies as genderqueer. (You can tell I am having a little difficulty with gender in this post while talking about Rufus. I do not want to offend again.)

It is a comfort to know that Cathy Brennan's letter had no negative impact on Rufus's educational life as it was dismissed by Rufus's headmaster. But the reality is Brennan an adult. maliciously damaged this youth, that's tragically undeniable.

Perhaps Rufus's headmaster has had prior knowledge of RadFems and just trashed the letter upon reading. But in any case Brennan action was reprehensible when considering she thought Rufus was 17 which Rufus only says is incorrect.'


Posted by planetransgender at 10:08 PM No comments: 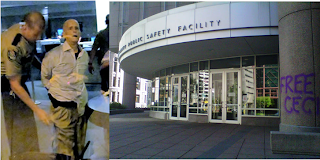 Leslie Feinberg, an award-winning author, transgender lesbian and beloved people’s warrior, was the only person arrested during the protest. Feinberg, who has publicly acknowledged that she is very ill with advanced Lyme disease, was held without bond for three nights in the Minneapolis jail and faced felony charges of property damage for allegedly spray painting “Free CeCe” on the outside walls of the county jail.

Because of a flood of outrage in the form of calls and emails to the prosecutor’s office, Feinberg’s arraignment and bail hearing were adjourned several times and finally cancelled. The felony charge was dismissed and Feinberg was released from jail.
On June 8, Feinberg issued a statement, which reads in part:

“The power of the people: felony charge dismissed before court hearing!
“The felony charge I faced was dismissed before court hearing this a.m. I may be recharged within weeks — or within the next three years — on misdemeanor/gross misdemeanor charges.
“If a month passes and I have not been recharged, … I will plan a trip here to South Minneapolis in order to take part in fundraising for CeCe and to offer our thanks to the ongoing work of the activist communities here. 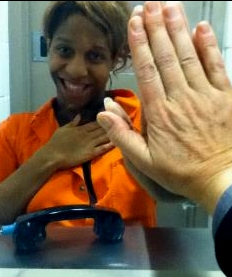 We need to keep Cece Mcdonald's inhuman treatment by the justice system at the very forefront of peoples thoughts. She is a transgender woman who is being incarcerated with men. Yes, that's right, as I type she may be fighting rape right now. Or she might be put into solitary confinement adding more mental anguish to the injustice.