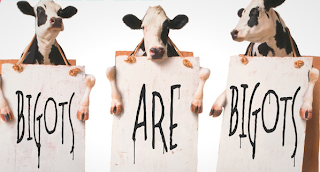 What better place to get waste deep into the gay anti chicken frier grease than in my little redneek Texas town of Mansfield.

Chick-Fil-A is so ingrained in society here it's Manfields place of worship Monday to Saturday and the Methodists church across the street overflow parking lot where they run the church shuttle on Sunday.

So what better place for a radical transgender activist to make a statement on the gay kiss in day? What better place than this Chic-Fil-A where everyone knows about the bully.

So I walked into the Chick-fil-a I couldn't help but notice the look of suprise on one of our burly town police as he recognized me. See, I just quit a job at the walmart directly behind this Chick-Fil-A. I have served that officer quite a few times as well as everyone inside at the moment.

As I approached the counter the young lady looked me square in the eye and said sweetly "can I help you ma'am"? I replied "Yes, is your manager here?" and she turned around and motioned this tall young man over. So now I have the attention of all three people at the counter, but strangely the policeman seemed disinterested, so I ask the manager, Brandon, (thanks Anna) "Have you seen the video?"

Brandon looked perplexed and asked "What video ma'am?" I replied the video shot at the drive up window at a Chick-Fil-A.

Unable to avoid the topic he said "Yes Ma'am , we all watched it this morning". I saw that look, the one of detachment start to come over his face. As a former customer service representative we used to call what he was getting ready for "a acting job". He was getting ready to play his part. 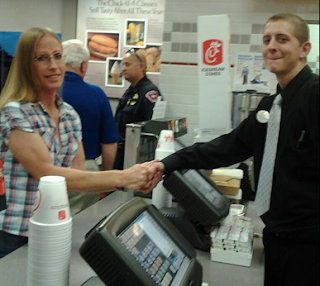 I said "Yes that video, the one with that obnoxious guy. The one with that rude obnoxious bully". A look of relief crossed this young mans face as he began to smile and I continued "I just want you to know, we are not all like that. Most of us, in fact, respect others opinions and would never bully anyone." I asked him to shake hands as that nice cashier took our picture.

After that she asked, if I would like something to eat. I said yes, you know, I am in the mood for a salad. so ordering one I took out my wallet to get my debit card and realized that I had left it at home this morning after buying some kitty food. It was my turn to look her directly in the eye and apologised telling her it was a honest mistake.

She offered to buy my salad for me.

Now anyone who knows me I would never give money to a company who's president or board contributes to anti LGBT efforts. But I was so disgusted that the Huffington Gay would run a article lording that vile bully's actions, but even that wasn't the reason. It was a comment from a friend on my facebook wall that motivated me.

To many LGBT people bullying is just fine if we feel its just and we are the aggressors. My friend was very concerned that my views were divisive and could split our community apart. So concerned it seemed almost like a warning, I should just go with the flow and not cause a uproar.

That's when the honey badger in me leaps out. I will NOT be silent in approval of the very behaviour that contributes to our youth AND adult suicides. I will not be silent no matter how righteous the offended feel.

I do not approve of Chick-fill-a proceeds funding anti LGBT activities and normally I would never have even considered going inside that store but.... I will fight with every breath in my body for the right of every Aerican to freely, without fear express their opinion. 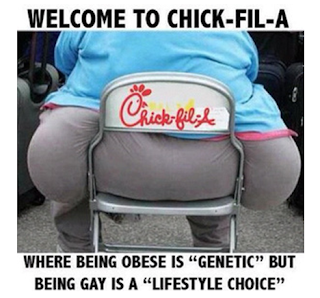 But that's not all of it as if it wasn't? Gay people have begun targeting the physically challenged as well!

Yes obesity is epidemic and without a doubt fast food is a contributor but this is fucked up. Gay people, please. Think, you know how it feels to be bullied. Transgender people think! You know how our physical incongruous is like flypaper to haters? Does it make you feel any better knowing we, our wonderful LGBT people are now known as bullies?

Posted by planetransgender at 9:53 PM No comments:

Huffpost gay Featured this articlevideo as if it was a win of some kind. Gay's, this kinda bullshit isn't going to win hearts. This bullshit isn't making any point other that a rich guy (in comparison) can act like a asswipe to a min wage service worker.

What a asshole. Common, HuffPost. Really? You think anything was proven by him asking her " how do you live with yourself"? That's why I stopped supporting this boycott. I have never eaten at out towns Chic-Fill-A, but I did go in there to use there wi-fi once and was given a whole lots of dirty looks and wouldn't have gone back in there in any case.

So you disagree with a private citizen and want to express your anger about it MR BIG in the CAR? BE A MAN, and go talk face to face with the owner and leave that poor girl alone. Sheesh!
Posted by planetransgender at 10:09 AM No comments: