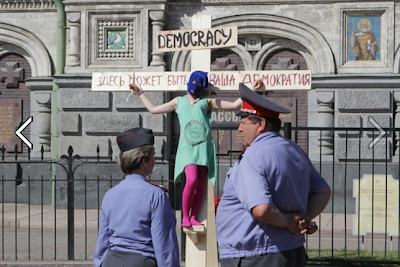 ANTI-FLAG: PUNK-PRAYER "Virgin Mary, redeem us of Putin" (Pussy Riot Cover) by antiflag. Lyric's and statement at the bottom of this post.

Source: Rolling Stone "After five days' sitting in the cage, some days for 10 hours at a time, the women appear exhausted. Violetta Volkova, one of their lawyers, said they were being tortured – denied food and adequate sleep. After a week of being dismissed and lectured by the judge, she could no longer hide her anger. On Friday, as the judge, Marina Syrova, denied yet another defence objection, Volkova began to shout."

Syrova, her glasses forever perched perfectly in the middle of her nose, answered tartly: "You're losing the frames of dignity."

According to Pussy Riot's lawyers, Russia has revived the Soviet-era tradition of the show trial with its case against the group. "Even in Soviet times, in Stalin's times, the courts were more honest than this one," lawyer Nikolai Polozov shouted in court. Outside, during a rare break, he explained: "This is one of the most shameful trials in modern Russia. In Soviet times, at least they followed some sort of procedure."

I a unprecedented act of courage one of the Pussy Riot members, Nadezhda Tolokonnikova smuggled out of prison this interview sent to her by hecksinductionhour, published on Wordpress by www.colta.ru

What have you learned about himself, about society, about the state at the time of your arrest? How have you changed?

- "The state and society behave like a textbook on the left of the theory: the state punishes and represses, the company is struggling and changing. Behind bars you see, the theory comes to life. One can only wish to be, to develop and to give and share. I want to prison ecstasies, inspirations, revelations about freedom, and lack of freedom that follows from this after all a person needs to develop. I would like greedy to think, feel - because in the absence of external develops a mad interior life."

...
Black robe, golden epaulettes
All parishioners crawl to bow
The phantom of liberty is in heaven
Gay-pride sent to Siberia in chains

The head of the KGB, their chief saint,
Leads protesters to prison under escort
In order not to offend His Holiness
Women must give birth and love

The Church’s praise of rotten dictators
The cross-bearer procession of black limousines
A teacher-preacher will meet you at school
Go to class - bring him money!

Patriarch Gundyaev believes in Putin
Bitch, better believe in God instead
The belt of the Virgin can’t replace mass-meetings
Mary, Mother of God, is with us in protest!

Punk rock is much more than a t-shirt, a sound, a record, or a band, and it knows no borders or nationality. Punk rock is a community and a family that spans around the globe. By now you may have heard that three members of our community, three young women who are members of the band Pussy Riot, are being detained by the Russian authorities for performing their protest song ‘Virgin Mary, redeem us of Putin’ in Moscow's Christ the Saviour Cathedral on 21 February 2012. The three have been charged with "hooliganism" under Article 213 of the Russian Criminal Code. If found guilty, they could be jailed for up to seven years."

"Pussy Riot embody the spirit of punk rock which speaks truth to power that inspired the members of Anti-Flag to start our band and dedicate ourselves to the punk rock community and the planet. The Russian authority’s actions against Pussy Riot are clearly an attack on freedom of thought, opinion and artistic expression which must be protected for any society to be free. Anti-Flag calls for the immediate release of Pussy Riot and all prisoners of conscience. Whether it be trumped up charges levied by police against Occupy protestors, or the trumped up charges levied by the Russian authorities against the members of Pussy Riot, there is no difference in the police-state tactics that those in power will stoop to in order to oppress those who are willing fight for equality and justice for all, not just the wealthy few."
Posted by planetransgender at 2:54 PM No comments: Links to this post 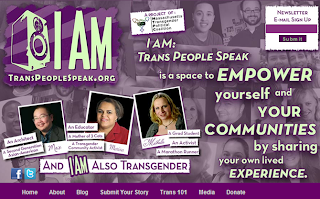 The Boston Edge's title not only places transgender people past the outer limits of social acceptability, it uses a hateful word to accomplish that, but it doesn't suprise me a bit. The Boston Edge belongs to same Gay.com network that rebroadcast the Dallas Voice's vicious Campaign against me to normalize the word defamatory word "tranny".

So of course the Boston Edge jumped on the opportunity to use that defamation, one more time.
The lone comment as of this publishing was from anonymous who wrote

"The use of the word "trannies" in your title for this article without quotation marks was uncalled for and is exactly the type of misprint that is all to common in this clearly cissexist publication that makes too many grammatical errors when it comes to the Trans Community and our identities."


MTPC doesn't have anyone to blame for inviting that title or the perception from the greater population we are a threat in restrooms. The MTPC championed the states bill sans public accommodation provisions, and now they have the nearly insurmountable job of proving to Massachusetts people Trans people are normal enough they should be allowed the dignity the rest of the states population takes for granted.

When obviously before they were not.

But I'm not here to beat the MPTC up for trying, after all they are family, misled family, but family after all so here's the video...

Posted by planetransgender at 6:54 AM No comments: Links to this post