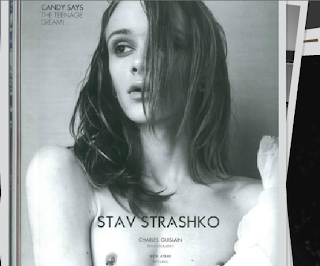 Sensational Stav Strashko is listed as a male model but many of the shots purposefully ascent Slav's femininity sending heartbeats racing everywhere obscuring and sexualulizing the gender devide....welcome to our world

This clip Slav is a little more relaxed behind the scene....

Posted by planetransgender at 10:44 PM No comments: Links to this post

Email ThisBlogThis!Share to TwitterShare to FacebookShare to Pinterest
Labels: 彼女の素敵なお尻と

*Note: As much as I applaud this it does not say the APA will cease the pathologization of trans people. It remains to be seen what affect this position will have as it concerns the DSM-5.

ARLINGTON, Va. (August 16, 2012) — The American Psychiatric Association advocates for removal of barriers to care for gender transition treatment and for the protection of civil rights for transgender and gender variant individuals. APA has long expressed strong affirmation of lesbian and gay civil rights since the 1973 decision to remove homosexuality from the Diagnostic and Statistical Manual of Mental Disorders. Now APA is issuing position statements in support of access to care and civil rights for transgender individuals.

Gender variant and transgender individuals must cope with multiple unique challenges, including significant discrimination, prejudice, and the potential for victimization from violent hate crimes. They often experience discrimination when accessing health care and are denied numerous basic civil rights and protections.

Being transgender or gender variant implies no impairment in judgment, stability, reliability, or general social or vocational capabilities; however, these individuals often experience discrimination due to a lack of civil rights protections for their gender identity or expression. Transgender and gender variant persons are frequently harassed and discriminated against when seeking housing or applying to jobs or schools, are often victims of violent hate crimes, and face challenges in marriage, adoption and parenting rights,

Discrimination and lack of equal civil rights is damaging to the mental health of transgender and gender variant individuals. For example, gender-based discrimination and victimization were found to be independently associated with attempted suicide in a population of transgender individuals, 32% of whom had histories of trying to kill themselves, and in the largest survey to date of gender variant and transgender people 41% reported attempting suicide.*

The APA joins other organizations, including the American Medical Association and the American Psychological Association, in endorsing strong policy statements deploring the discrimination experienced by gender variant and transgender individuals and calling for laws to protect their civil rights.

Access to Care for Transgender and Gender Variant Individuals
The American Psychiatric Association: 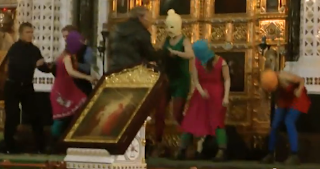 As you probably already know the punk rock group "Pussy Riot" will spend the next two years in the most horrible of human conditions for 30 seconds of wild gyrations and a prayer that Putin be driven away by a feminist virgin Mary.

But, really, did they expect that to happen? Literally? Or was there a deeper meaning or other traditions that motivated Pussy Riot? As it turns out there is.

Pussy Riot's wild dance in the Church exposed the Infiltration Of Russian Orthodoxy By the FSB using a tradition familiar to many Russians, yurodstvo or foolishness for Christ. This as it turns out this is a Real Threat not just to Putin but the leadership of the Russian Orthodox Church as evidenced by the charges that include 'religious hatred'.

It is love that motivates Pussy Riot worldwide.

State more time in prison
The more arrests - more happiness
And every arrest - with a love of sexist
After swinging his cheeks, as the chest and abdomen

Putin ignites the fires of revolution
He was bored and frightened people in the silence
Whatever punishment he had - that rotten ash,
With no time in many years - the subject for wet dreams

Arrested on May 6 the whole city
7 years we have little, give me 18
The ban yelling, slander, and walk,
Take his wife's dad Lukashenko

Now Putin and his massive police state will not be sedated until they capture the remaining pussy rioters especially since they have vowed to do more performances. We have only one recourse. Everywhere Putin goes, Pussy Riot goes. We are all Pussy Riot.

Why should we as gender diverse the most marginalized of all minorities become Pussy Riot? Because Pussy Riot is everyone of us, regardless if we are transgender, Cisgender L.G.B. or even hetero.

Inside Russia the remnants of Pussy Riot to include their children are being chased and persecuted so we have to take the fight to Putin whenever her travels.

Posted by planetransgender at 8:37 AM No comments: Links to this post