I Was ReTweeted By MTV

I Was  Retweeted by MTV who I retweeted in a obvious self promotional name dropping stunt. Reminds me of Dire Straights (another name drop)  I can't stop..... I need it for free...


MTV:: Against Me! Share Details of “Killer” New Album WHATS ALL THIS NAM$E DROPPING ABOUT FOR CRYING OUT LOUD?

Just the hottest fucking licks to hit in YEARS!

Posted by planetransgender at 10:15 AM No comments:

Email ThisBlogThis!Share to TwitterShare to FacebookShare to Pinterest
Labels: Against Me, I was retweeted By MTV, Laura Jane Grace 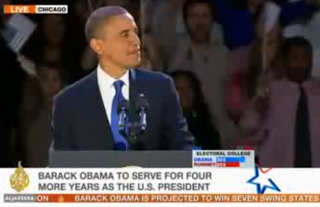 From: Barack Obama to Kelli Busey

I'm about to go speak to the crowd here in Chicago, but I wanted to thank you first.

I want you to know that this wasn't fate, and it wasn't an accident. You made this happen.
You organized yourselves block by block. You took ownership of this campaign five and ten dollars at a time. And when it wasn't easy, you pressed forward.

I will spend the rest of my presidency honoring your support, and doing what I can to finish what we started.

But I want you to take real pride, as I do, in how we got the chance in the first place.

Today is the clearest proof yet that, against the odds, ordinary Americans can overcome powerful interests.

There's a lot more work to do.

But for right now: Thank you.

The incumbent president has captured at least 303 electoral votes - more than the majority of 270 required for victory in Tuesday's quadrennial election.

During his victory speech in Chicago, Obama said that "the task of perfecting our union moves forward".

"We are an American family and we rise or fall together as one nation," he said. "We know in our hearts that for the United States of America the best is yet to come."

All I can say is thank god. Thank God for Obama, the man who has directed this country on a progressive path, the man who told the Social Security Department to stop harassing my employer because Ohio refuses to amend trans people's birth certificates, thank god that I can keep this job I have fought so hard for.

Posted by planetransgender at 2:31 AM No comments: