UN Might Vote To Forget Trans People On The TDOR

Just some of our murdered Trans Family who we will be mourning today November 20th 2012, ironically the same day UN Resolution 17/19 gets voted on again.
[•IGLHRC – International Gay and Lesbian Human Rights Commission list serve]

The resolution on extrajudicial executions (EJEs) is coming to a vote before the United Nations in New York on November 20th.

This year the lead sponsor of the resolution, Sweden, has for the first time included a reference to gender identity, underscoring that no-one may be killed because of their sexual orientation or gender identity.

Some States are proposing to delete the reference to sexual orientation and gender identity, whilst others wish to remove the entire listing of groups needing explicit protection from killings.

The last time this important resolution was considered by the UN's 3rd Committee in 2010, an amendment passed to remove the reference to sexual orientation. However, States fought back to overturn the amendment at another vote in the General Assembly.

Please take action now and urge your government to oppose any attempt to delete the list of groups needing protection, including on grounds of sexual orientation and gender identity. Download a Q&A Sheet with more information about the resolution (PDF), as well as a one-page sheet (PDF) on why explicitly identifying groups in need of protection is essential. Voting records (Excel) are also available from when the amendment was adopted last time, so that you can see whether your government supported the sexual orientation reference, opposed it, or abstained. 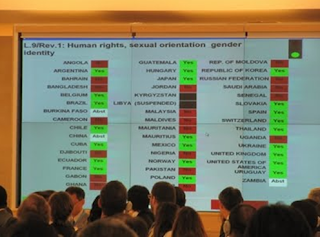 You may also wish to send a copy of any correspondence to your country's ambassador or Mission in New York. A list of New York Missions is available at: UN.org

Thank you for your work to protect this crucial initiative to oppose unlawful killings based on sexual orientation and gender identity!

•Action Canada for Population and Development

•CariFLAGS - Caribbean Forum for Liberation and Acceptance of Genders and Sexualities

•ICARH - International Centre for Advocacy on Rights to Health

Posted by planetransgender at 10:10 AM No comments: Links to this post