Convicted felon, post-op Donna R. Perry AKA Douglas is being held on unrelated weapons charges is now a person of interest in the 1990 cold case slayings of three prostitutes in Spokane.

According to a 1990 LA Times article Yolanda Sapp, Nickie Lowe and Kathleen Brisbois "were all heroin-addicted prostitutes whose bodies were left along the Spokane River. They had been shot and dumped from a car."

Source: Spokesman.com "The case broke wide open on Sept. 14 when the Washington State Patrol Crime Laboratory technician found a database hit on Perry, who was arrested in March in Spokane and was in federal custody in Carswell, Texas."
"Perry was arrested here after a retired detective saw her buying ammo and a pistol magazine at the White Elephant store in Spokane Valley. The detective knew Perry is a felon who is prohibited from possessing firearms."

Its not all about impersonal 'cold cases' that happened perhaps before many readers were born. its about family. I found this on a Spokane reporter Chelsea Kopta facebook  wall: 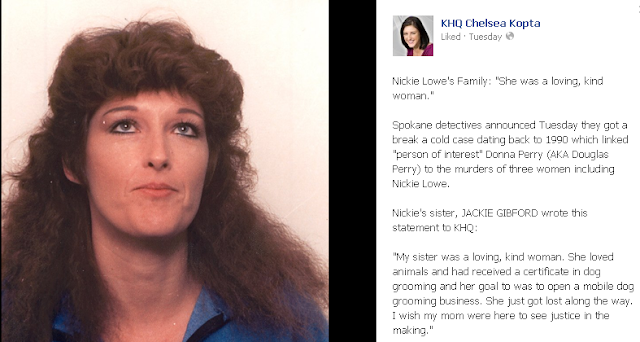 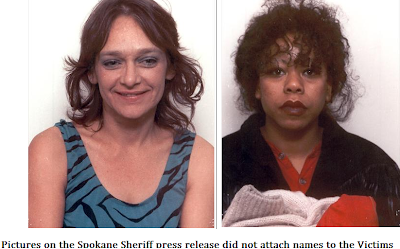 The press release from the Spokane County Sheriff Dept:

Detectives would like to speak with (maybe one of us?) any known associates of each of the three victims, as well as anyone who may have had contact with Douglas Perry during the late 1980's to early 1990's. In particular, detectives are searching for anyone that may have purchased a firearm from Perry, during this period of time.

Anyone with any information that may assist detectives with these cold cases are asked to contact SCSO Detective Jim Dresback at 509-477-2714 JDresback@spokanesheriff.org or SPD Detective Mark Burbridge at 509-625-4262 info-mburbridge@spokanepolice.org.