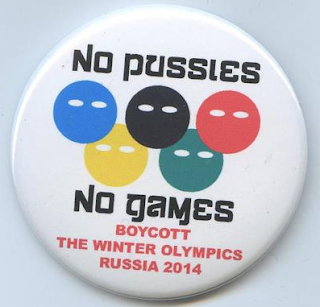 There is a growing movement on Facebook to show solidarity with the Russian feminist Group Pussy Riot by Boycotting the Russian 2014 Winter Olympics.

There is even a vote to honor Pussy Riot Time Woman Of The Year. This is important as mainstream media not only recognizes Pussy Riot but places the group among the Worlds Most Influential Woman.

Now that Putin has signed the "Gay Propaganda" law and it's companion law criminalizing offending the Orthodox Church, how could people of conscious participate in the Russian 2014 Olympics?

Pussy Riot's artists persecuted during a trial mocking the Russian judicial system were made examples of by Putin for trying to open their comrades minds to consider what is happening in their country.

Its time to make this know, Russia and the world will not quietly acquiescent to Putin's tyranny.


And even world leaders are openly questioning Putin..

This struggle for human rights is going on now but who is Pussy Riot?

"Even though they put us in jail, we have not lost"

About art as a political statement and the freedom of speech in Russia.

What is happening in Russia?

Is the country in the process of obtaining a new, authoritarian state ideology, with the church taking the place of the party?

The Pussy Riot affair is only one among many attacks on the freedom of speech and artistic freedom in the country.

Oslo World Music Festival is the initiator and arranger of this seminar, in cooperation with the Nobel Peace Center, Amnesty International and Norwegian P.E.N.

Pictures of families homes in Sochi, the city of Olympic Games as they are being torn down leaving them only moments to evacuate. This is being described in mainstream media as "heroic efforts" by the Russian goverment.

Posted by planetransgender at 9:40 AM No comments: