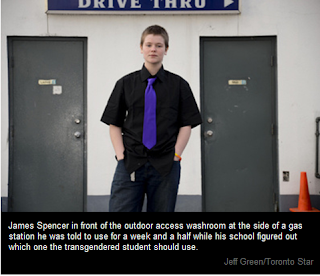 It's the Principle of the matter.

Principle of causality, as efficient cause. Aristotle defined it as "Everything that moves is moved by another".

In this case it was James Spencer's High School classmate's petition  asking that he should be allowed the most basic of rights. The right to use the correct bathroom without endangering and ostracizing himself.

Transgender people worldwide would be delighted if public accommodations were not the rallying point for the opponents of our equality. It's such a basic right, but given that hatred is the glue that binds together our opponents the toilet maybe the most fitting place to start.


Principle as a final cause: "Final cause is the end, or goal, which guides one to take the necessary actions to obtain it."

So now that James can use the bathroom like the rest of humanity he will be able to continue his life's work, enlightening cultural morality.

"It represents a set of values that orientate and rule the conduct of a concrete society. The law establishes an obligation in the individual's conscience that belongs to the cultural field in which such values are accepted. It supposes the liberty of the individual as cause, that acts without external coercion, through a process of socialization."

Definitions for Principle found in Wikipedia


Posted by planetransgender at 8:54 AM No comments: Links to this post