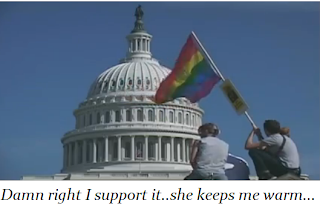 Could you imagine a teacher being suspended for playing this video requested by her students?

Well nether could she and she talks about that in the next video. Its about human rights. Its about love. It's about equality, hope and freedom.

Video: NY Post Slams US With "Tranny" But Balks At F__ot

This "Article" by the NY Post has to be without a doubt the most hurtful and incendiary transphobic pieces of shit ever published by one of Murdoch's media maggots.

GLAAD,who's article brought this to my attention claims it was they who were responsible for the NY Post's gay awareness. GlAAD says they stopped using the F word because of their efforts during the AIDS crisis. 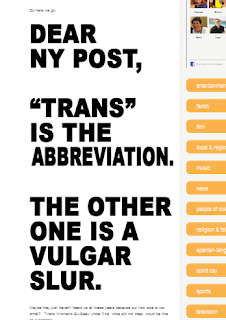 However GLAAD is apparently unable to stop them from using the T word. I think it may also have something to do with the assailant being associated with the NYFD and everyone knows there's no gay firefighters. (The Mahmoud Ahmadinejad syndrome)

So you might ask, why bother then? Glaad with all its might is seemingly powerless to stop that trash heap of a rag, Kelli what could you do with your little planetransgender bloggy thangy?

Although I have not been a big fan of the duplicitous GLAAD in the past I have seen some major changes in them recently. And a TRUE Ally against transgender defamation is our ally.

And if need be, the next time one of there runway cisgender money making queens utters the T word in public claiming he is 'reclaiming' it on our behalf I will be the first to remind GLAAD of the snip to the right from there own blog.

This video from the NY Post appeared in my daily google 'tranny' alert after I wrote the post and thought I'd include it. Don't buy the NY Post. Really.


Posted by planetransgender at 3:34 PM No comments: Links to this post

The Diagnostic and Statistical Manual of Mental Disorders, published by the American Psychiatric Association APA, contains descriptions, symptoms, and other criteria for diagnosing mental disorders.

These criteria for diagnosis provide a common language among clinicians and mental health professionals who treat patients with mental disorders. The APA is currently developing the latest edition, DSM to be published May 2013

There are extremes in all communities and ours is no exception. Being radical it seems right that I occupy the one on the far side advocating for our removal lock, stock and barrel from the DSM-5.

I'm also open to others opinions and since it's such a hot button issue, one I felt needed our attention I created a Facebook event that was joined by five thousand people for conversation. Some against some for our removal and some in the middle, but all respected.

Did those of us who wanted our removal succeed?  No, most likely we failed despite my best efforts at getting local people out from behind their keyboards. That was somehow my fault. Not the gay communities.  We didn't take to the street at key moments and gain the spotlight as they did twenty years ago.

The December first 2012  press release from the APA announcing the next bureaucratic step needed to publish the DSM-5 had been taken by the board voting it's approval.

And the world fell over themselves to announce trans people were no longer listed as "disordered" by in the DSM.

Did I miss something in that press release?

The  Message From APA President Dilip Jeste, M.D., on DSM-5 offers no specifics, only justifications and denials regarding the process.

The often quoted Med Page published in May following the last public meeting reports what may not up:

The workgroup responsible for dealing with the hot-button issue considered a variety of other approaches, addressed later in this article. Ultimately they settled on a formal diagnosis -- potentially qualifying a patient for insurance-paid treatment if they want it -- but with a less pejorative name than "disorder."

So the name might change but what is the difference between the two words and what does it mean to trans people? The free medical dictionary defines....

"The psychological diagnosis gender identity disorder (GID) is used to describe a male or female that feels a strong identification with the opposite sex and experiences considerable distress because of their actual sex."

"unhappiness with one's biological sex or its usual gender role, with the desire for the body and role of the opposite sex.

Not much difference between the two words is there?

Please understand this is just conjuncture since no further official information available untill the DSM-5 is published in May 2013.
But given that one D word is being substituted for another what's the end result?

We remain pathologized by the APA

Regard or treat (someone or something) as psychologically abnormal or unhealthy

Which in my opinion denies  us our rightful place among the worlds well adapted productive citizens.

But now its just a waiting game. The APA has what it wants, our undivided attention, our money, the guidelines to normality, acceptability and our chances at success in life.


Posted by planetransgender at 11:39 AM No comments: Links to this post