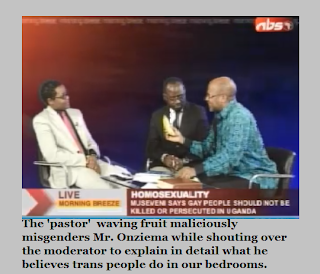 Adovacte-"The Reverend Martin Ssempa, a vehemently antigay pastor in Uganda who travels the country preaching against "sodomy" by showing pornography in churches, couldn't show basic common courtesy to a transgender man whom he appeared with on Ugandan talk show Morning Breeze."

In the video clip from Ugandan news channel NBS, Ssempa repeatedly interrupts and shouts over Pepe Onziema, a transgender man and LGBT activist in Uganda.


Video streaming by Ustream
More at the Advocate

Posted by planetransgender at 11:25 PM No comments:

A transgender woman from New Zealand will serve two years in a male jail  for hitting a friend on the head with a bottle of champagne.  The prisoner Ms. Glen Cooper petitioned the court for home detention saying it is dangerous for transgender woman in New Zealand prisons. That request was denied despite the Chief Omibudsman Beverley Wakem's plea that transgender inmates be housed with the gender they present regardless of surgical status because otherwise they will be raped and beaten.

"This court has no power over Corrections policy but, in my view, it's an appalling policy but it is one I'm powerless to do anything about."- Northern Advocate

1.Where the Chief Executive is satisfied that a transgender prisoner has completed gender reassignment surgery, the prisoner must be promptly placed in accommodation that accords with that prisoner’s new gender

a.are not subjected to acts of aggression or humiliation.

e.if not transferred to the prison of the gender they perceive themselves to be, they are entitled to single cell accommodation if they choose, or to share a cell with other transgender prisoners.

f.are treated with dignity and consideration when being searched.

g.they wear clothing that is suitable to their needs.

h.can continue, at their own cost, any medical or hormonal treatment commenced prior to imprisonment. However, sexual reassignment surgery is not to be considered during a term of imprisonment.

So basically pre-ops may be raped, beaten and subjected to hellish conditions, but not post-ops?


Posted by planetransgender at 10:42 AM No comments: