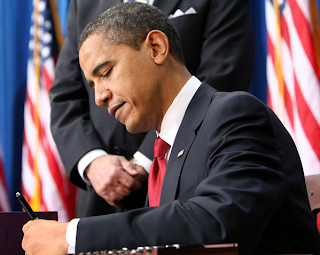 The Washington Post  published a letter signed by thirty seven Democrats urging Obama to sign a executive order banning job discrimination with companies that contract to the Federal Government.

Many of us ask, OK so thats nice, cynically remembering the HR3015/3685 debacle, even if there was a executive order how would that affect me as a civilian?
Nether executive orders, legislation or company policy guarantee fair treatment, but it does affect employers perceptions on how they should treat all LGBT people.

The letter published on the Post can be read in full Here:


[Y]ou are in a position to protect millions of American workers immediately by including sexual orientation and gender identity alongside long-standing anti-discrimination protections.

As you know, ENDA would prohibit most workplaces in the United States from discriminating against potential and existing employees on the basis of their sexual orientation or gender identity. From our perspective, ENDA’s premise is simple: it would make federal law reflect the basic principle that Americans should be judged on their skills and abilities in the workplace, and not on irrelevant factors such as their sexual orientation or gender identity.

Currently, an Executive Order prohibits federal contractors from discriminating against employees based on race, color, religion, sex, or national origin…Issuing an Executive Order that includes sexual orientation and gender identity is a critical step that you can take today toward ending discrimination in the workplace.

The Washington Blade reports that support for ENDA is building in the Senate:


In addition to Merkley, who has sponsored ENDA in the Senate, signers of the letter include longtime members of the chamber who’ve supported the bill, such as Sens. Patrick Leahy (D-Vt.) and Dianne Feinstein (D-Calif.) and Senate Health, Labor & Pensions Committee Chair Tom Harkin (D-Iowa), who pledged to move the ENDA legislation out of committee this year.

New faces to the Senate have also signed the letter, including Sens. Mazie Hirono (D-Hawaii), William Cowan (D-Mass.), Brian Schatz (D-Hawaii) and Elizabeth Warren (D-Mass.). Lesbian Sen. Tammy Baldwin (D-Wis.), the only openly gay member of the Senate, is also a signer. No Republicans signed the letter, but an Independent, Bernie Sanders (I-Vt.), penned his name

Posted by planetransgender at 9:59 AM

Email ThisBlogThis!Share to TwitterShare to FacebookShare to Pinterest
Labels: ENDA