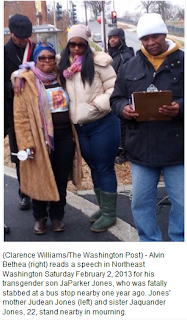 Her family is upset hate crime enhancements have not been filled and are asking that the federal goverment steps in to prosecute the case. "In an interview, Bethea said the family believes that Jones’s transgender identity led to the stabbing. The family plans to call on federal officials to take over the prosecution, he said.

“We do believe the elements of a hate crime are present,” Bethea said.

It's clear her murder wasn't a random bizarre act of violence since Gary Niles Montgomery has been declared mentally competent to stand trial.

An initiative soliciting statements from the LGBT community leading to charges of hate crimes was announced Saturday by Mayor Vincent Gray at vigil.

"As part of the arrangement, the mayor's office of GLBT Affairs will solicit so-called impact statements from community members in criminal cases that were motivated by the victim's sexual orientation or gender identity. The statements are intended to factor into a judge's sentencing decision."


Posted by planetransgender at 10:18 AM