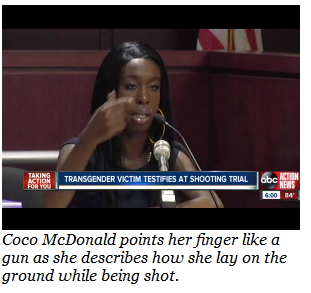 Tavares Spencer doesn't deny being told in a text by Coco McDonald prior to meeting that she was transgender. Spencer's defense said that he thought she was only kidding and went ahead with the planned date.

Spencer's attorney said that when he met Coco he planned to have sex, but when her transgender status became undeniable he became 'scared' shooting her motionless body twice then firing four more times as she attempted to flee because he was "in fear for his life".

The prosecution is saying that Tavares Spencer lured Coco to the abandoned house to rob and murdered her because she is transgender.

My 2 cents? Tavares Spencer made the prosecutors case for a hate crime. They are planing on calling Coco to the stand again today.

Posted by planetransgender at 6:15 AM