Missourians for Equality Novel Approach: Please Vote On Our Rights

Referendum.  The word send chills up the backs of most traditional civil rights advocates. The threat of a popular vote is always a consideration when advancing LGBT rights. It's a tool occasionally used successfully by anti LGBT groups to defeat progress we achieve by city council and legislative means.

Voting on a minority's rights by the majority is problematic at best. If it were not for the discrimination faced by said minority the issue wouldn't have come up in the first place.

Or so we thought. The new kids on the block, Missourians for Equality have received State approval to begin collecting the 105,000 petition signatures needed for a state wide vote in 2014.

I asked Aaron Malin, executive director of Missourians for Equality this morning about this novel approach. Malin explained "We see this a viable method since millions of Missourians are already living under such protections the fear factor has disappeared for them. Our efforts will be much like the recent Maine Marriage vote. Addressing the more contentious subject of transgender protections Arron said "A recent poll indicates 64% favor same sex marriage and we think those same people will support gender identity protections as well."

As for religious organizations potential opposition Arron's group is taking a preemptive approach by asking for enhanced protections for religious freedom as well.

As far as the established Missouri group's non support of the ballot initiative Arron replied " Promo is using a different, incremental path towards equality. They have done much of the groundwork but we don't see this happening in the states legislature. We look to expound on Promo's work for a statewide vote. And if we fail, there is always the more traditional path. In any case we see the vote as a good thing."

Show me Show Me State!


Posted by planetransgender at 9:49 AM No comments: Links to this post

Email ThisBlogThis!Share to TwitterShare to FacebookShare to Pinterest
Labels: Missourians for Equality 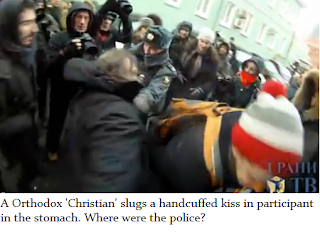 Police and homophobes tried to disrupt and FlashMob against homophobic law outside the State Duma. December 19, 2012, Dmitry Zykova for www.grani.ru videos

Arrested at the kiss in was one of my favorite journalists Elena Kostyuchenko who writes for Novaya Gazeta one of the last remaining free press outlets in Putin's Russia.


Posted by planetransgender at 8:33 AM No comments: Links to this post