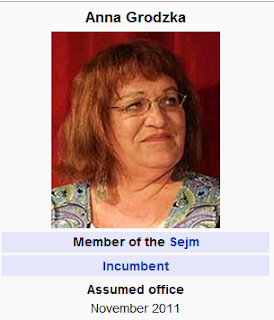 Anna Grodzka, the first transsexual member of Parliament in European history has been nominated deputy speaker of the house according to Reuters. This will not be a easy job for Ms. Grodzka as there are extremely transphobic MPs, right wing partys and Catholics who will fight her nomination at every turn.

The job involves chairing sessions of parliament when the speaker is not available and ceremonial duties. Ms. Grodzka's nomination is another historic step for transgender rights worldwide!

Posted by planetransgender at 2:12 PM No comments: Links to this post 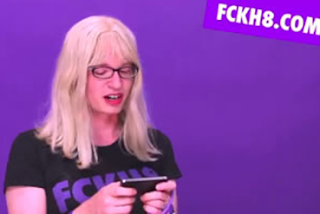 Stacey Campfield has reintroduced SB 235 a watered down homo-genized version of previous years but its just as bad. 2013's version does not explicitly state homosexuality or make any reference to transsexuality. Instead the bill would require school staff who perceive 'alternative sexual' behaviour in a student grades one through eight to give reparative therapy to said student.
Then the bill would require the school to inform the students parents about there son or daughters deviant lifestyle.

This man is a menace to children. Another beaten child. Another homeless LGBT youth. Another murdered trans teen who in desperation prostituted herself. Another dead body. Fuck you Campfield.

This is the way it is Campfield. Today. Your hate will not defeat us.

At the presentation of senior class awards (Class Clown, Most Likely to Succeed, etc.), an LGBT teen publicly announces during his acceptance speech for Class Actor award that he is an LGBT teen and is tired of acting as someone he's not on a daily basis. His classmates clearly approve. He still has six months left of school (as of January 2013).

Posted by planetransgender at 10:14 AM No comments: Links to this post