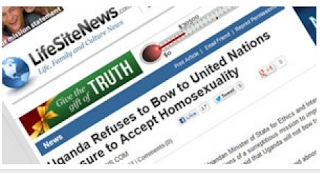 In 2008 I became a soldier in this conflict in this far off land not because the methodologies employed by anti gay groups were so nefarious, but because this hate is being funded and promoted openly by American organizations and secretly by the US goverment officals who belong to the  'family'.

Thes lies and hate mongering have taken an amazingly brave man from Uganda:

American Catholics killed David Kato who lead the fight for Sexual Minorities Uganda. Did an American actually  beat Mr Kato sending him to this agonizingly slow death?? No. Cowardly American Christians such as Scott Lively got someone else to do that for them.

The Kill Gay Bill was reintroduced this year and is intended silence if not by murder by imprisonment.

Mercedes Allen wrote a open letter to Life Site News asking for a clarification about it's relationship with Human Life International. Mercedes has also begun the petition: LifeSiteNews, stop promoting organizations that stir up anti-gay hatred in Africa.

Posted by planetransgender at 10:29 AM No comments: Links to this post