Summit Church Sparks Nevada's Response To Christianity? Throw Her Out.

Kent Paris who's reparative NARTH based agenda focuses on polluting middle of the road  Christian churches was confronted by Kathy Verbiest Baldock who authors Canyon Walker Connections at the Summit Church Sparks Nevada on February 10th 2013. This is what happened:

"Do you know the consequences of rejecting your gay youth as opposed to accepting them?

If parents with gay children were to follow the teachings and therapeutic tools offered by Kent Paris, your gay youth are EIGHT times more apt to attempt suicide than those gay youth who are accepted.

They may suffer depression SIX times more often than those who are accepted.

They are THREE times more likely to get involved in drug and alcohol abuse than those gay youth that are accepted.

This is research; this is scientific, peer reviewed research.

If you are the parent of a gay youth, when you leave here, stop on the way home and buy a package of razors, a bottle of whiskey, a hypodermic needle and a lifetime supply of antibiotics because that is the life you will more often impose on your gay child through your rejection and shaming.

This is what you will be doing to the child you have been charged to raise in the way they should go.

Do not try to force your child to be something they are not, something to your liking. You will not only be responsible for the effects on their mental and physical health, you will also, in all likelihood, push them from God."

Posted by planetransgender at 10:01 AM No comments: Links to this post

Pope's Stepping Down and God says he's quiting too

I decided to check out god's response to the Rat's announcement he was retiring and what better place to do that than twitter? 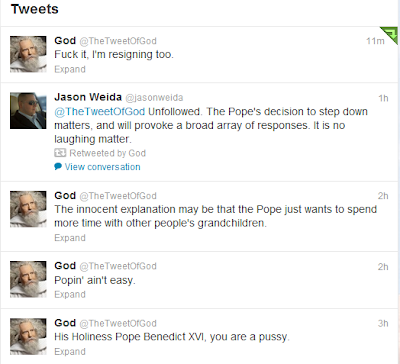 So this asshole is quiting? The jerk that made me cry all Christmas after his hatfill screed attacking me last Christmas eve is stepping down? My tweeter response:

In any case at least this man won't be able to hurt me anymore. I just hope he stays away from kids, or doesn't get into a position to enable pedophile priests again.

Posted by planetransgender at 9:25 AM No comments: Links to this post